The Immortal Memory Of Robert Burns 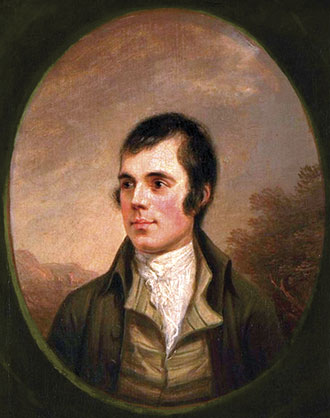 I am a Burnsian. By that I mean I am an admirer of, and advocate for, the works of Robert Burns, Scotland’s National Bard. I received most of my schooling in the lovely market town of Dumfries in the south of Scotland where Burns spent the last few years of his life and where he is buried, so I have that special connection, as well as others in more recent times. I have been a member and past president of the Calgary Burns Club (one of the world’s most active) for twenty-five years and serve as the club’s Bard. A number of papers on various aspects of the poet’s life and works written by myself and other club members are available to the general public on our website (calgaryburnsclub.com), including a short biography of his life which is more easily digestible than most of the weighty tomes on that subject published over the course of the last two-hundred-plus years.

This is the season to celebrate the life and works of this great man, and on or about the 25th of January each year (the date of his birth in 1759) thousands of Burns Suppers are held around the world, including one here at Lakeside. I am told it is very good, although unfortunately I have never been able to attend because of my participation in events in Calgary each year.

So what is all the fuss about? I have not heard of any Shakespeare Suppers, nor any held to celebrate John Milton, or Dante, or any of the other great literary figures of the past. What has brought about this virtually unique annual celebration of a man and his works, who had been dead for just over 230 years? The great Scottish diaspora has helped to make the phenomenon so international, but I would suggest that it is the genius reflected in the poems and songs themselves, as well as their power to inspire and entertain, that explains why Robert Burns continues to be held in such high esteem. His appeal has grown more and more over time, characterized by his supporters as ‘The Immortal Memory of Robert Burns’.

In the short space to which I must confine my comments, it is not possible to discuss all of the more important aspects of Burns’ eventful life, nor to explore and debunk all of the myths that were peddled by some of his early biographers and others, mud that has tended to stick ever since, including in particular that he was a dissolute drunk. This is the first of just two of the most egregious calumnies that I would like briefly to refute here. Aside from the lack of any credible evidence that he displayed a fondness for drink beyond the norm, how could anyone produce the enormous volume of poetry and songs that he did during his short life (dying at just 37 years of age from a congenital heart condition) together with a quite astonishing output of correspondence extant, along with much more that has been lost?

And this impressive productivity was achieved while struggling to succeed as a tenant farmer, laboring under conditions that would severely test the physical stamina of most strong men, then later while being employed as an excise officer who was required to put in punishingly long days traipsing over a large, mainly rural territory, on horseback, including through Scotland’s often dreadful winters.

And then there is the ‘wink-wink, nod-nod’ reputation he has always had as a philandering lady’s man who carelessly spread his manly seed wherever he ventured. Yes, he did like the ladies, and he fathered four children to women other than his wife, Jean Armour; not counting two sets of twins with Jean prior to their nuptials (although they had previously entered into a consensual, legally binding marriage not uncommon in Scotland at the time) there were four other unintended pregnancies of which we can be reasonably certain.

However, to his credit, unlike so many putative fathers (then as now) he always readily acknowledged his paternity and immediately took responsibility for the care of the infants. Two of these out-of-wedlock children were raised by Robert and his wonderfully understanding and indulgent wife. In the third case the mother unaccountably refused his offers of help, and in the fourth it appears that the mother kept her pregnancy and the birth a secret from the poet. In other aspects of his life, Burns generally conducted himself with dignity and decorum and enjoyed a reputation among his peers as a man of honor and compassion. He had his share of conflicts with others, but was held in high esteem by most of his contemporaries. In most respects we might safely declare him to have been a good and decent man.

Turning to his legacy of poetry and song, Robert Burns has few equals in English literature, or so we Burnsians earnestly believe! A goodly number of his pieces are at least partly familiar to the ordinary person, although many may not be aware of his authorship. Auld Lang Syne, for example, is a universal favorite, but how many know that it was composed by Robert Burns? Then there is A Red, Red Rose, and Flow Gently Sweet Afton and many others.

And who does not have at least a passing acquaintance with the plight of that poor unfortunate ‘Wee sleekit, cow’rin’, tim’rous beastie,’ described so empathetically in the opening line of To a Mouse, followed by the memorable axiom that: ‘The best laid schemes o’ mice and men gang aft agley’ (go often astray), reputedly the inspiration for the title of John Steinbeck’s well-known classic, Of Mice and Men.

Some of Burns’ best works are not as well known to the general public as they so richly deserve to be, which is a pity. Tam O’ Shanter is arguably the finest ballad in the English language, Ae (one) Fond Kiss the most beautiful and sublime love song in any language, Holy Willie’s Prayer the cleverest work of satire ever composed, and A Man’s a Man For A’ That the most profound indictment of class-based inequality. Undoubtedly Burns’ use of the Scottish vernacular makes many of his best poems a little too obscure in meaning for the non-Scot (even to many native Scots), and that cannot be denied. But just a little study on the part of the reader will unlock so many amazing treasures.

And so, on January 25th, please spare a moment to join with myself and millions of others around the globe in raising a glass to ‘The Immortal Memory of Robert Burns.’