CHARLEY AND SANDY: A Dog Story

“Dogs have a way of finding people who need them.” 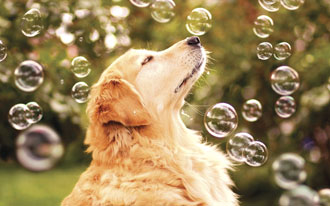 It was Springtime—our third year living in San Juan Cosala. One day Anita called us: she had a dog, a Golden retriever that was left overnight, tied to her gate: another abandoned creature she would save. She had rescued another Golden a year earlier that we took, and the suggestion was that this could be a good companion. His collar had a metal tag with the word “Sandy” engraved, so we called him that. We had him cleaned up, vet examination and took him home with joyful anticipation. But soon Sandy became a real challenge. He was not interested in his new sister, barked incessantly, and worst of all, was a car chaser. I’ve had many dogs in my time, and have overcome behavioral problems but Sandy had his demons.

One day, Grace called. She was smart about dogs, and suggested maybe a different environment. She had a friend across the lake, recently widowed, who had dogs before: he would likely give Sandy a try. And so we met Charley, who lived in a quiet, rustic community east of San Luis Soyatlan, far away from roads and traffic, and by the lake.

He met us with a welcoming smile at his picturesque orchard of orange and mango trees a stone’s throw from the lake’s edge. He caressed Sandy as he spoke to him and I felt a warm glow that this could be a better place for Sandy. Always difficult to give up a dog but emotions had to be put aside.

After a month Charley phoned. All was well: Sandy had calmed down and enjoyed long walks and swam in the lake in that peaceful place. Three months later Charley asked if I would like to visit, which was bitter-sweet, but I felt Sandy had little memory of us now, thus avoiding confusion for him.

We visited on a Sunday. Charley’s sister, Blanche, welcomed us. She had moved down to look after Charley after his wife died. And there was Sandy, sitting by Charley under the blossoming trees, happy as punch. They had bonded. Sandy now took walks on his own, barked at the occasional cow, and always returned at noon. Over the next three years, I visited occasionally: Charley himself found happiness again, and Sandy was devoted to him. The fidelity of a dog is boundless.

One day Blanche called. Charley had died, suddenly. She would take care of Sandy for the meantime; perhaps later a neighbour would take Sandy.  Several weeks later, I was in the vicinity of Charley’s home and instinct compelled me to visit Blanche. She was in the garden as I approached, and we sat down on Charley’s wooden bench.

She cut right to it: “After Charley died, the dog he loved changed. He never left Charley’s room and would sit in a corner all day. He lost his spirit.” And then, Blanche spoke words that broke my heart: “Sandy ran away on the day we cast Charley’s ashes in the lake. We found him on the main road four miles away- he had never been there before. Jorge, our gardener, buried him over there where he and Charley used to sit.”

I lingered there, sitting by the water’s edge. Three years together, and what they sought: hope, friendship, peace, even love, they both found in each other.

And then a voice called me. It was Jorge. “Senor, come, please walk with me. I have something to show you.”

Minutes later, we entered Charley’s nearest neighbour’s house and Sybil, who lived there, called out, “Come, boy.” A dog, with a sandy-coloured coat, came running in. “This is one of Sandy’s pups – he most resembles him.  I would love you to take him, if you like. I already have the mother.” And so I did. And this is where this story ends. We called him Sandy, and he has brought more happiness to this house where he and his sister, Tess, play all day.