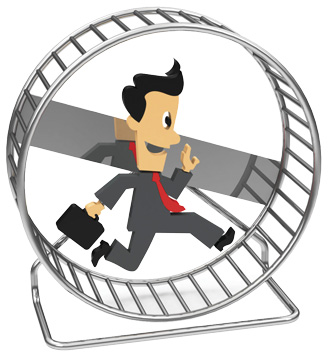 Almost everywhere we go lately, the talk of the town is traffic. All traffic. It started in Chapala on one side of the street. It grew quickly. A road-resurfacing project started diverting traffic on Madero so one or two blocks could be resurfaced.

Then on Hidalgo, one side of the street, followed by the opposite side of the street. Every day the project grew larger and larger. We thought maybe it was infrastructure repair. But the machines kept coming. Orange posts, netting, and the streets and sidewalks were being torn up. Block after block was being chewed up, and they were moving further and further up west on Hidalgo towards Ajijic.

Then it started in Ajijic on the mountainside of the carretera. First with surveyors, followed by the cones and netting and finally the workmen and the cutting of the pavement.

What is it? First we had guesses. Widening the road? Working on infrastructure beneath the road? Then we see signs about the ciclopista in Chapala, renovation by the State of Jalisco in Ajijic, and renovating the ciclopista. Now there are rumors of a bicycle rental organization to encourage people to rent a bike and drop it off and rent another bike when needed. Like luggage carts at airports.

I can barely imagine myself on a bike, let alone carrying all my different cloth bags from a shopping trip. I could look up on a website to find out what is going on, a website I call “rent a rumor” and try to see which story I believe most. Or wait for the Guadalajara Reporter to let us know the facts as presented to them in that moment. What is really going on? When will it end? Who is paying for it?

The construction has made driving an exercise in frustration. But not only for those of us who drive our cars. Those who take buses are complaining of overcrowded buses that are unable to stop to off load passengers because the road is torn up and there is no safe place for passengers to disembark. Inside the bus the passengers will keep yelling for the bus to stop, but the driver cannot find a place.

Taxi’s are an alternative, except they have to fight the traffic just as much as other drivers, and the slow traffic makes it difficult to service as many people. So the drivers aren’t too happy.

Even people who want to walk to their destination aren’t happy. Their usual route is torn up, their back-up walking paths may be blocked with equipment or fences, and they find themselves backtracking and trying to walk around the construction areas.

Then let’s talk parking: What parking? For a while, even the entrances to the parking lots in Chapala were cut off. And when it is all finished, we cannot begin to imagine the amount of parking places that have been permanently eliminated. Side streets will have to hold more parking, and that is very difficult as they are already at maximum.

Merchants must love the fact that people cannot access their business at all. And the same holds true for the employees. We are not just talking a “little” inconvenience here. Perhaps there are plans we do not know about for how to deal with the parking.

But we have contributed to these problems. How many households of expats have two vehicles? And those who do ride bikes have nowhere to ride safely. My short-term advice is this: be patient, plan ahead, leave more travel time, and drive carefully.