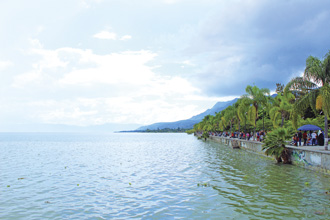 This year’s rainy season has helped to revitalize the lake. And like many people here at Lakeside, I love to sit near the lake and attempt to sort out my thoughts, or just get rid of my thoughts all together.

The lake is at its highest point since 2008, I believe. I have seen the lake’s water volume decrease so low that people could walk out next to the pier on the lake bed. Now nearly full, I often see the tops of trees nearly enclosed by the water, the trees that sprung from the dry sand, and grew. There is a strange dance that goes on between humans and nature. I’ve seen people move out onto spaces and develop properties that were once covered by the water. Now the lake reclaims its borders, and some places are flooded out.

Today I sat and watched from a distance. The lirio is back, as always. And there are more birds nesting, flying, and diving in the lake. Jet skis and sight-seeing watercraft are once again plentiful. I love to watch the fishing. Along the lakeside, the piers, and the outlooks, I see young and old fish the lake. No fancy equipment is necessary here. I watch intently as a young fisherman takes a pop bottle, plastic, and empty, and wraps fishing line around and around and around until the hook appears. He baits the hook with a small piece of tortilla. He casts out the line and waits. The process is repeated often. Sometimes he is rewarded with a fish. I saw a gringo fishing today also. He had two fancy poles, and lots of bait. But he didn’t seem to have the luck of the child.

Rainy season had a wonderful effect on the lake, but the roads suffered major collateral damage. Hidalgo in Chapala became a maze of pot holes and buckled pavement, which still is in bad shape, although the City has started patchwork.

There are some areas where the term “pot hole” just doesn’t quite describe the craters in the road. I try not to drive when it’s raining or after a rain, because the puddles disguise the width and depth of the road damage. And I don’t relish the thought of spraying pedestrians who are attempting to negotiate their way around the sidewalks and the mud.

The end of rainy season also means the return of the snowbirds. A restaurateur commented that our dinner companions must be from Canada, which they were.

“How did you know?” The husband asked.

“You are wearing shorts.” My husband and I were wearing long sleeves, and jackets. We’ve been here long enough to become completely acclimatized.

The low season this year, didn’t feel too low. There was a lot of traffic, and fortunately for the businesses, there seemed to be more people about. But now we are on overload. Traffic has passed the crawl stage and we’ve entered the world of stop-n-go traffic. There are times when I see that pedestrians are making better time that those on the road.

But thank goodness during the high season for the politeness of Mexican drivers, who allow you into the traffic, they sometimes slow and flash their lights to let you know they will wait for you to make the cross-traffic turn. My NOB neighbors are not always so inclined—Except for the Wal-Mart intersection; there, all bets are off!

Now we get to watch Lakeside as it prepares for Christmas, and fills our world with more color, posadas and the maturing of the incredible poinsettias. Thanks to the abundant rainy season.