The Birth Of A Rock 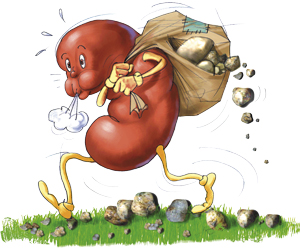 Since the dawn of time on planet Earth, when rocks were born of cooling magma billions of years ago, or: since about ten thousand years ago, when God thought having stones in his diorama would be good idea, the creation of rocks has always been a laborious process. Not so much with kidney stones. Geologically speaking the birth of a kidney stone is a very rapid affair that only seems to take an eon.
It’s hard to imagine that acid indigestion, from which I suffer, can lead to the development of kidney stones, but if you fight acid indigestion with TUMS, it can happen. Glaxo Smith Klein discovered that antacids can deplete a person’s calcium which, later, can result in osteoporosis, a serious condition which causes an otherwise healthy person to crumple into a pile of amorphous flesh as you ask for directions in Walmart. To counteract this side effect, the company infused their product with enough calcium to re-create Ayer’s Rock in my right kidney.
It was another beautiful day in Ajijic. I remember that because I thought it was my last. At about 10 a.m., on a Saturday, it seemed that my duodenum decided to wrap around my kidney like a boa constrictor and begin using my ureter as a thong. It was so painful I was afraid I was going to die, but then it got so painful, I was afraid I wasn’t going to die! The pain of passing a kidney stone can reduce a heathen the caliber of Attila the Hun to a kneeling, pleading, praying penitent, begging for relief and/or death! I am told the only thing worse is giving birth.

What seemed like a bowling ball being squeezed through a garden hose was in fact more like a tiny grain of sand through a pipette. Compared to the birth of an eight pound child being shoved through a space that has had no more stretching, in many cases, than that provided by an organ the size of a humble graphite writing instrument, the kidney stone is a walk in the park. If this is the case, and I have no reason to doubt it is, women should be placed on pedestals and treated with awe and reverence at all times.

As my pain hit, I broke into a sweat and knew that if I didn’t lie down immediately I’d drop. I made it to the spare bedroom and flopped onto the bed. Saturday the maid cleans and she had left several carpets folded up on the bed, so I lay there on a pile of carpets like Aladdin after a magic carpet mid-air collision.

The pain was so intense that I was both trembling and sweating. The sweat ran down my legs and into my shoes, escaping as steam from the lace-holes. The only thing that saved me from feeling deathly sick was the all-consuming feeling of nausea. I couldn’t call for my wife; I was afraid of opening my mouth to speak in case the pain got any worse. All I could do was make mewling noises. Mentally, I tried to go to my meditational tranquil place and found it had been overrun by kidney strangling, ureter twanging psychopathic Hell’s Angel bikers.

I remembered my father having had kidney stones after a friend of his suggested that sea-shell calcium was a good supplement. He had been taking it for several months and it grew a little rock quarry in his Kidneys. His reaction was much like my own: “Shoot me now.” An ambulance was called, but by the time they arrived, he had given birth to a healthy, young, kidney-stone called Ralph and the crisis had passed. I had to pay for the ambulance anyway.

As the pain grew, so did my groans and, as a result, my wife discovered me and, seeing that every drop of blood had left my face and retreated to the safety of my ankles, called a doctor to come to the house immediately. When the doctor arrived, he could not seem to understand why I was confessing to the theft of the Hope Diamond, the murder of Jimmy Hoffa and several of Dillinger’s robberies. Oh yes, pain will make you confess to just about anything. That’s why torturers have this undying belief in the efficacy of torture, - they get answers! They may not be the right answers, but they are answers.

After the doctor gave me an injection with a needle the thickness of a Harley-Davidson tail-pipe, the pain started to abate. I was able to unhook my finger and toenails from the ceiling and land back on my crashed carpet bed.

With the help of a drug called Alopurinol, my ureter relaxed enough to allow the rock through to my bladder and from thence out through my urethra to join the other cobblestones of Calle Javier Mina. A subsequent examination and urinalysis showed I was retaining urine “Like a dog that has to pee everywhere” the doctor said. Oh well, I thought, at least people would know which patch of Mexico is mine.