There but For The Grace of God Go I 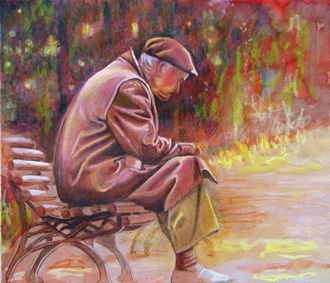 I see him every single day walking down one side of the careterra or the other. He is always in motion, with a sort of awkward gait that is punctuated as he limps as he places his damaged right leg ahead. It seems as though he might have once suffered from a stroke. His right arm dangles loosely from his shoulder. He carries a bag in his left hand. And he wears an old, oversized sombrero, which flops about each time he takes a step and protects him from the elements. He makes good time as he walks.

His clothes are always clean, so I know he must have a home somewhere. But I see him several times a day, always walking. In my mind, I would play out different scenarios about who he is, where he is going, what he is doing? First I thought he must have some sort of job he was walking to or from. But as his frame became more familiar to me, I realized he probably couldn’t do much labor for his job due to his disabled arm and leg.

As time has gone on, I found myself looking for him along the road. As if my day wouldn’t quite be complete until I’ve passed by him at least once. If I don’t see him, I worry that something may have happened to him.

One day I was parked outside of a farmacia, and he walked up, placed his bag outside, went inside the farmacia, then returned, sans purchase. He then looked into the trash bin, moved things around until he found something and pulled it out. It was can, which he pulled from the bin as if it was pure treasure. He carefully placed it into his bag, replaced the lid on the bin and went to investigate the next bin, and he sneered as it didn’t even yield him so much as a soda can. “So that’s what he does!” I thought.

Now I was brokenhearted. No more mystery for me. He roams from Chapala to Ajijic and back every day in search of cans to recycle. That is his work. This is his meager contribution to his family’s income, and while I feel sad, I am amazed at the amount of time and effort he spends each day for such little reward.

I watched as he walked further up the street limping on his right leg, with his hat flopping with each stilted step. And I make a silent vow, that I will collect the very few cans that we use, and I’ll save them, and I will one day place them near one of his stops. Hopefully that small gesture will repay the daily pleasure I take in watching him go about his daily task.

When Victoria recently told me the story, I mentioned that I knew quite a bit about him, and had actually written about his story, though it was a long time ago. So as the famed radio commentator Paul Harvey used to say, “Here now is the rest of the story . . .”

LIFE CAN BE A BITCH

I first arrived in Chapala some twenty years ago with two motor homes, two cars, two dogs and a distinctly dismal-looking future. (I had hired a crew of five to get me down from Los Angeles.) I was coming off a couple of years in the film business where I had developed an acute case of the Midas Touch in Reverse and had finally decided that if I couldn’t change my luck, at least I would change my location.

Quite by accident, I found a lovely little trailer park right down by the lake where a space cost only sixteen dollars a month. The park was owned by a Mexican family that had been there since 1936, and in accordance with ejido law, was still farming a small portion of it. The family’s youngest grandson, Carlitos, was in charge of the park. He was an industrious, fun-loving young man and because I knew no one else at Lakeside, we soon became good pals.

Then one day, two attorneys arrived from Guadalajara to inform the family that they were squatting on private property. Stunned, the family quickly collected legal documents going back several decades. Undeterred, the lawyers came again, this time with a pickup truck brimming over with black-shirted types. When one of them poked a pistol against the head of the matriarch of the family, the matter was “legally” settled.

The lawyers brusquely informed the park’s gringo tenants that we had 15 days to move out. Many of them, elderly and living on Social Security, didn’t know what to do or where to turn. In desperation, they petitioned the American Consulate in Guadalajara, and a young officer happened to arrive at the trailer park a couple of days later, just as the lawyers were again berating the remaining residents. When the young consul officer voiced a mild objection, the lawyers yelled at him, as well, saying he had no authority to intercede.

I’ll never forget what came next. The young man, in a cool, measured voice, said that was true, but where he did have authority was in the US Consulate, where he was in charge of approving all visa applications to the United States filed by residents from the state of Jalisco . . . and perhaps someday the lawyers would be standing before his desk.

Had he slapped them across the face, their expressions could not have looked more startled. Instantly, contempt turned to pseudo-cordiality as the shysters did everything but fall to their knees. At that moment, I was very proud of the young State Department officer and of course the good ole US of A.

But the scene only stalled the eventual final outcome. Carlitos, along with the rest of his family, was thrown off of their own property. Later, he made a raft down by the water and became a fisherman. He also became addicted to liquor in its crudest form (rubbing alcohol and water) and some few years afterward suffered a stroke which left him with a shuffling gait and garbled speech.

Today he can be seen limping along the highway in a big straw hat, his black dog trailing behind him. He makes his living now by doing simple, odd jobs. I often stop to talk to him, though he does not remember me. But I remember him. He was the first friend I made at Lakeside and I have often wondered how his life might have otherwise turned out.
Years ago, a very popular American president with enormous power, prestige, personal style and wealth nevertheless observed that life is unfair. Can you imagine what my old friend Carlitos must think?