A CHRISTMAS THOUGHT: The Later Years 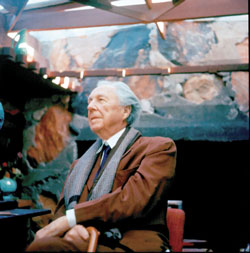 Your choice, but before you decide, consider this: there are certain parts of the brain that actually keep developing as we grow older—particularly if we give them plenty of exercise. Moreover, though we tend not to be as mentally acute as we age, experience can be an enormously rich resource. Don’t believe it? Consider the following:

* Benjamin Franklin invented bi-focal glasses at 78 to help correct his own poor vision.

* Martha Graham danced until age 76, and kept on choreographing for another 20 years.

* Frank Lloyd Wright worked on the design for the Guggenheim Museum until his death at 91.

* Michelangelo completed his final frescoes in the Vatican’s Pauline Chapel at 75.

If the above proves anything, it’s that rigidity and despair are not inevitable with the advent of old age. Moreover, a growing body of scientific research stresses that creative or challenging activity can actually help keep a person physically healthy. Those who do engage in such activity make fewer visits to a doctor, fall less often, use less medication and are less likely to be depressed.

Studies at the University of California at Berkeley suggest that there are five ingredients for staying mentally vigorous: diet, exercise, challenge, novelty and love.
Experiments show that lab rats’ brains grow larger and sharper when they get new mazes to solve and a variety of items to play with. And they live longer, as long as 900 days instead of the norm of 600 days. Whether the rodents’ romantic attachments figured in all this is best left to the imagination.

A study of life here at Lakeside would prove many of these same premises.

Some time ago, this writer wrote an editorial about the mysterious allure of Mexico, which dismissed many of the usually-given reasons for living in Mexico, i.e., the lower cost of living, the weather, etc.

Instead, the article focused on the more subtle attractions of a country which encourages us to become more adventurous, more creative, courageous and compassionate; in other words, to become the person we always wanted to be, but rarely had the time, inclination or opportunity to do so.

One has only to check the list of Non-Profit and Charitable Organizations here at Lakeside to see the impressive array and variety of such groups—and behind almost every one of those organizations are senior citizens who have found great pleasure and satisfaction in excelling at something they probably would not have even tried back in “the old country.” Such activity reaps many personal benefits, not least of which it keeps us looking younger.

There’s a lovely story about a 90-year-old actress who was elated when she lost the part of an “84-year-old character” because a local theater director thought she looked too young. Now, who among us can’t relate to that?