A Novel by Antonio Ramblés

Reviewed by Margaret Van Every 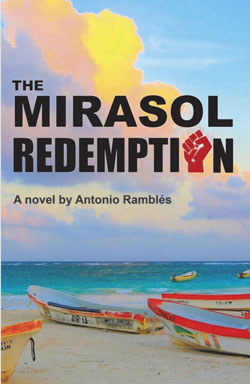 If you hear the word Weatherman and think first of the turbulent 60s and 70s, then you will value this novel, which is not so much about the storm when it raged, but the aftermath and how it drastically shaped the lives of several Movement activists for decades to come. Antonio Rambles’ book thoughtfully considers what happened to four individuals who paid a huge price for their passion for bringing about socio-political change. The narrative relates the consequences of their commitment and their choice to remain fugitives for the rest of their lives rather than pay what they considered an unfair debt to society serving prison time.

Hiding in a small Huichol village near the coastal town of San Sebastián, Mexico, they stumble into a life happily in accordance with their values and that allows them to apply their training as a doctor and nurse, running a clinic serving the largely forgotten indigenous inhabitants. We see the nuts and bolts of fugitive life, its incessant fear of discovery, its unrelenting tedium. Some 35 years roll by in this existence sequestered from the world. Most of us would rather have chosen the prison term. They have no social life, television, films, computer, recent books or magazines. They have meticulously cut themselves off from the world to the point of having their own twins raised in the States by family.

Ramblés is a masterful story teller. He successfully applies to this novel the technique he managed so skillfully in his collection of short stories Laguna Tales: The Lure of Lake Chapala. His approach is to weave alternating threads of each of the main characters’ past and present so that the final tapestry emerges piecemeal, chapter by chapter, at times a bit disorienting to the reader (think Faulkner) but an ambiguity that goads the reader to seek resolution. Historical markers and music of the times anchor us chronologically, help us recall what we were doing as the characters live their own lives. What the characters have in common is their involvement in the Movement, their presence in Chicago at the time of the Democratic Convention in Chicago in 1968, and the shared life as fugitives in Mexico.

What could possibly have brought about the redemption referenced in the book’s title? Short of spoiling the plot, I will say that the teenage boy Ricardo, raised by the protagonists, inherits their passion for social justice and becomes an activist in the fishing community of Mirasol. He brings about desired change through peaceful protest in contrast to the kind of activism that brought his parents to Mexico.

This novel flows seamlessly and keeps us involved, even across decades when very little happens. That requires a deft narrative knack. Nonetheless, sometimes I craved less detachment and more emotion in the telling. The character imbued with the most winsome persona, to my mind, is the teenage boy discovering the emotion of finding first love, experiencing sex and the joy of asserting newfound power as he becomes a man and forges his future.

The book avoids direct philosophizing but by implication prompts us to ask ourselves probing moral, political, and social questions—namely what might we have done under similar circumstances, what means are most effective in bringing about social change, how much would we be willing to risk for our beliefs, and what is most important in life and how we choose to live it.

The Mirasol Redemption is available on Amazon in paperback ($9.99) and on Kindle ($2.99), Free to Kindle Unlimited subscribers.