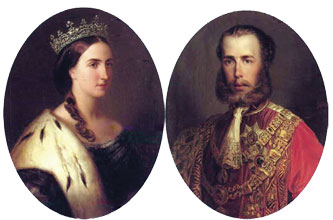 My vague knowledge of Mexican history in the time of Maximilian has been greatly improved by reading Chapultepec, a recently published historical novel that puts fictional characters in the right place at the right time to interact with real people during critical events. What a painless way to get the facts!

Captain Jason Jeremiah James, an American volunteer in the fabled French Foreign Legion, came to Mexico in 1862 with the Intervention Force sent by Napoleon III to establish a Catholic Latin Empire in Mexico. Fifteen years earlier James had fought with the 4th Kansas Rifles at Chapultepec when General Scott’s US invasion forces defeated a weakened Mexico barely recovering from its War of lndependence from Spain.

Another American citizen, Paris- educated Sarah Kent Anderson, has arrived in Mexico to look after her dead brother’s silver mines at Zacatecas. She was a school chum of the Empress Carlota, and is persuaded to join the royal court in Mexico City as a Lady- in-Waiting.

Thus the author puts his fictional characters into the thick of things as Maximilian von Hapsburg, Archduke of Austria, Emperor I of Mexico, manages to botch the royal regime imposed on Mexico by the French, alienating not only the Indian electors of President Benito Juarez, but also the Catholic hierarchy in Mexico, and the French Army that was sent to back him up.

Carlota returns to France in a vain attempt to persuade Napoleon not to abandon her husband. Juarez’s Republican army of irregulars pushed north all the way to El Paso, make a rapid return to Mexico City when thousands of French troops are withdrawn, leaving a weak Conservative Army to fight its own battles against the more determined Republicans.

Sarah Anderson’s growing attraction toward Jason James and her recognition of the injustice done to Mexican democracy by the Emperor and Empress she loves, leave her confused and unsure of where her loyalties should lie.

Minor characters are well drawn and add color to the story. The author’s skill at placing them where the action is moves the plot at a fairly rapid pace.

The fictional love story almost gets lost in the drama of its setting. Those were turbulent times. While the United States was fighting its Civil War to determine the right of states to maintain a policy of slave ownership, Mexico was fighting its own civil war over the human rights of peons and miners who were virtual slaves to hacendados and mine owners. European monarchs were competing among themselves to enlarge their widespread empires with territorial grabs wherever they saw weakness.

Napoleon III wanted to restore and extend the Roman Empire and King Leopold of Belgium coveted the mineral wealth of under-developed regions.

Chapultepec tells a fascinating story that sheds light on the tragedy of naive, well-meaning Maximilian’s three-year reign, an ill-conceived appointment that was doomed from the start. Zollinger’s research is impressive and he has written a novel that illuminates the characters of the men and women who made that period of Mexican history so dramatic.