"…more than just a physical adventure." 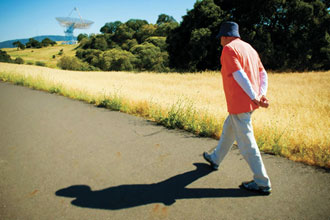 In high school, I read Henry David Thoreau’s classic essay, “Walking,” which was first published in Atlantic Monthly in 1862. Thoreau offers in this essay his thoughts on how to use walking to return to the soul, particularly the “wild” soul. Few people have “a genius, so to speak, for sauntering, a word whose genealogy he traces to the Sainte-Terrers, those in the Middle Ages who journeyed to the Holy Land. Thoreau insists that “the walking of which I speak has nothing in it akin to taking exercise, as it is called, as the sick take medicine at stated hours,--as the swinging of dumb-bells or chairs; but is itself the enterprise and adventure of the day.

Of his fellow townsmen who sit in their shops not only all morning but all afternoon as well, Thoreau declares, “I think that they deserve some credit for not having all committed suicide long ago.”

I have been enthralled by books and diaries about foot journeys-arduous journeys or survival journeys, some taken voluntarily, others involuntarily, but always journeys that challenged one’s self at the very core. Into a Desert Place by Graham Mackintosh chronicles the author’s year-long, three-thousand-mile solo walk around Mexico’s Baja Peninsula, struggling with the sun beating harshly upon his fair Scottish complexion, fighting off scorpions, rattlesnakes, thirst. The Man Who Walked Through Time is Colin Fletcher’s account of his journey through the Grand Canyon, largely alone, enduring two months of struggle to become the first man to walk the entire length. Cindy Ross, who after walking the length of the Appalachian Trail from Maine to Georgia, walked the Pacific Crest Trail from Mexico to Canada, documenting her Pacific Crest Trail travels in a diary-like book, Journey on the Crest: Walking 2600 Miles from Mexico to Canada, interesting in part because of her temporary but satisfying relationships with people she met both on the trail and in the small towns along the trail.

Endurance: Shackleton’s Incredible Voyage, by Alfred Lansing, details months of arduous walking through severe Antarctic conditions that tested the endurance of Captain Ernest Shackleton and his twenty-seven men. In 1915, stranded in the Antarctic after their ship became impossibly lodged in ice 1200 miles south of the southernmost tip of South America, they were forced to mostly walk, dragging their little boats, that carried very limited provisions, to a tiny island two-hundred-and-fifty miles west, a courageous journey that lasted almost two years. And every man returned home to tell about it.

In 1977 and 1978, Naomi James became the first woman to sail alone around the world, actually beating Sir Francis Chichester’s record for speed. For 271 days she lived, moved, and walked on a 53 foot yacht, her movements attuned to the movement of the sea. On land during a three-day stay in Capetown, she writes in Alone Around the World, “I could feel the motion of Crusader under my feet, and the floor of the restaurant felt very hard and blunt, almost as if it was striking my feet when I walked.”

These incredible adventures do have spiritual consequences on the participants. To Graham Mackintosh, “It has been more than just a physical adventure. Baja gave me an intermittent, fleeting glance into another world; not just a world of columned cacti and strange creatures, but a world of spiritual experience a thousand times more different than my old rational, logical, scientific conception of reality…. “

Colin Fletcher, at the beginning of his Grand Canyon book, writes, “I saw that by going down into that huge fissure in the face of the earth deep into the space and the silence and the solitude, I might be coming as close as we can at present to moving back and down through the smooth and apparently impenetrable face of time.”

In her diary, Cindi Ross writes: “For nearly half a year I’ve walked the length of California, discovering its mountains, meadows towns and people. The Pacific Crest Trail, a line of dirt in the earth, asks nothing of us. It is silent, immobile, indifferent, yet everything experienced along its course is intricately connected to life.”

These are all wonderful journeys, but in the next “Hearts at Work,” I will explore equally wonderful journeys, walks closer to home, the little pilgrimages, perhaps even a walk to the grocery, that we can take every day to the Holy Land inside of us.