– Jonathan Blair, South African born documentary film-maker is invested as a Commander of the Order of the British Empire. 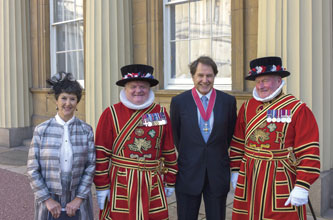 “This is the moment I’ve most been waiting for!” commented my brother, showing a sign of excitement as we drove through the palace gates. The investiture ceremonies, where the Queen of England honors some 2,000 citizens of the United Kingdom and Commonwealth for services ranging from government, education, health, science, the arts, military, sports etc. occur 25 times yearly. “Who would have thunk it!” said Jon when inviting me as a guest to accompany him to Buckingham Palace to receive his C.B.E. “I have earned many awards, so I feel ambivalent about this one, but for most others, this is a moment of un-imagined glory.” I wasn’t ambivalent about accepting the invitation. I remembered the thrill of the Coronation in the fifties, a nine-year-old in a South African boarding-school. Now 87 men and women to be invested and 260 guests would come within touching distance of Royalty.

Tension mounting, we ascended the magnificent, red-carpeted, bronze-balustraded Grand Staircase lined with royal portraits, marble and bronze statuary and priceless Sevres porcelain vases in niches; past gleaming brass, breast-plated Queen’s Household Cavalry Guards. Arrangements of orchids and lilies scented the air. This is the home of one of the richest women in the world.

Being in the ballroom, not just for a tour, is impressive. 120 feet long by 59 wide, it is brilliantly lit by six gorgeous crystal chandeliers hanging from 44 foot ceilings. Two thrones are at the far end; enormous tapestries adorn the walls; red carpets and gold-leaf predominate. Everything speaks of wealth and power.

Among the dark suits, kilts and women in fascinator hats, I sat at the back on a raised, red and gold, satin-covered bench, perfect for viewing both the investitures and the backing and forthing of ushers leading single-file recipients to the waiting chamber. The Lord Chamberlain forbade applause. Only whispering allowed. Five Yeoman of the Queen’s Guard in Tudor, red and gold uniforms, dating from King Henry VII, 1485, entered in formation, their leader pounding his staff. They stood at the front, their backs to the audience until, at a cue, they turned in unison. One forgot to turn and was prompted. Some of us giggled. They stood motionless for 90 minutes, a feat, given they were well past retirement age. Guarded by two Nepalese Gurkha orderlies, a tradition begun by Queen Victoria, Prince William entered in gold-braided uniform. If it was not the Queen presiding, William was definitely a second best!

Standing on a little carpet onto which no one may step, the Prince dubbed the Knights with a sword. Then came the C.B.Es. I felt a surge of pride as Jon bowed his head to receive his medal. “You must have had a very interesting career” William remarked. “Not as interesting as yours!” Jon replied. The actor, Chiwetel Ejiofor (Twelve Years a Slave) followed after Jon. As we couldn’t hear what the Prince said to each one, the endless list got tedious. Younger guests shuffled in their seats and I amused myself by counting the seconds each got in the spotlight, averaging about 50. A string orchestra and piano in the Musicians Gallery played throughout the ceremony, helpful in stemming the tedium. The choreographed pageant ended as it had begun with the anthem, then Royalty and guards exited down the ballroom’s centre aisle.

Outside the guards obliged for photographs with us. “What’s it like standing for so long?” “Not easy, especially with my bad ankle,” replied the friendly Yeoman, before climbing into a horse-drawn carriage, to circle the Quadrangle and leave through the palace gates, a fitting ending to a ceremony of a life-time.

What is it about us mere mortals that remain attracted to Royalty? Many would gladly see them dissolved as no longer serving a function. Scotland wants independence; Britain’s economy, like so many countries is suffering; social services and National Health are under-funded; some citizens live in cardboard boxes, and yet the Monarchy prevails. Does the tradition provide a sense of continuity and stability? Would Her Majesty’s realm be worse off without her?

(Ed. Note: Gabrielle is a part-time resident of Ajijic, and has been for some years.)