A Packer Backer Priest In Mexico 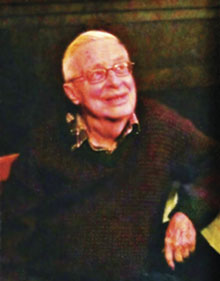 I recently had lunch with Father Brendan McKeough at St. Norbert College in De Pere, Wisconsin. He turns 92 next Armistice Day. Father Brendan no longer strays too far from the Abbey, but he regularly celebrates Mass for the many Mexicans in Green Bay’s Norbertine parish. He is a Packer die-hard who, given the chance, would beatify Don Hutson. Brendan also has an insatiable appetite for learning. He reads about a book a week, mostly history, a passion passed down from his mother, who spent a lifetime teaching in a one- room school house.

Upon graduation from high school in Fond du Lac, Wisconsin, Brendan moved in with his grandparents, who provided him with room and board for $2.50 a week while he studied accounting at St. Norbert. But WW II was raging so he had to take a break from college. Brendan next found himself in basic training at Camp Wheeler in Georgia. It was there, at a Mass, he got a real whiff of social wrongdoing. Six pews were roped off “FOR COLOREDS ONLY.” He was outraged - but that was just the beginning. He was then shipped off to the South Pacific where it was one shock after the other. He witnessed black sailors relegated to waiting on tables. He saw Filipinos still exploited in the rice paddies, a reminder to him of a remark about “Our Little Brown Brothers.” (The paternalistic remark was coined by William Howard Taft, but it later took on racial overtones.)

Brendan returned to St. Norbert in 1946 and one year later completed a degree in accounting. But he knew then that he had to do more than shuffle numbers for the rest of his life. So it was a monumental day for him in 1948 - and a tearful day for many young ladies - that he announced he would be entering the priesthood. Brendan was ordained in 1953.

He went on to decades of juggling a teaching career in De Pere with caring for his beloved mother who, in 1988, died at age 97. As Father Brendan put it, “The Lord then gave me a special message.” It came to him in the guise of a “World Hunger” brochure advertising a retreat in Cuernavaca, Mexico. At first Father Brendan didn’t grasp from whom the heavenly message came. He glanced at the brochure and threw it in a wastepaper basket. The Lord intervened once more: Brendan’s cleaning lady did not empty the basket. Father Brendan took another look. This time he got the message right. He not only went to Mexico - he stayed 13 years. Most of that time was spent in Cuernavaca with side trips to Mayan communities in Guatemala.

Cuernavaca is about 55 miles south of Mexico City. Parts of it are upscale. But upscale people were not Father Brendan’s kind. So he sought out his kind of people near Cuernavaca’s bus station. Hidden from view by landscaping is a shantytown called La Estación where thousands of Mexico’s poorest, mostly from rural areas, struggle to survive while looking for work. Father Brendan walked the slum alleys. What he saw were dirt floors and children everywhere. No signs of electricity and no running water.

It didn’t take Father Brendan long to get drawn into the miseries of this shantytown and to acquaint himself with the people who had no choice but to live there. He heard stories from exploited wives and abused girls. Who else but a priest could they talk to? And listen he did.

Any doubts Father Brendan may have harbored about leaving priestly comforts in Wisconsin vanished when, in 1992, he attended the funeral of Cuernavaca’s former Bishop, Sergio Méndez Arceo, and saw the outpouring of grief and affection people had for the Bishop. Yet, not everyone felt that way. The “Red Bishop,” as he was known among his detractors, had long ago set aside his privileged background and became a staunch liberal with ties to the likes of Cuba’s Fidel Castro and Ivan Illich, an Austrian who wanted to make Cuernavaca a center for de-Yankeefication of Latin America. Chumming around with leftists like them did not endear the Red Bishop to J. Edgar Hoover’s FBI. Nor did becoming an activist for the poor. I didn’t ask Father Brendan where he came down on Arceo’s outspoken ways, but I could sense that Father Brendan was among those at the Bishop’s funeral who grieved mightily.

Well, my interview was coming to an end. He said he was running out of material. I did not believe that for a minute, but it was time for lunch. Father Brendan did not want to end the interview with talk of funerals and other dreary subjects, so he wound up on a lighter note. He told me he was baptizing babies one Sunday in his Parish when he found himself in a very awkward situation. Where in the baptismal instructions is there a clue about how a priest is to anoint a baby with holy water when the mother is breastfeeding the infant?

And, finally, there was his account of a shantytown Christmas party at which the only presents children could even hope for might be candy from a smashed Piñata. Father Brendan described a young girl who was in exactly the right place when the candy cascaded above her. She grabbed a handful of sweets in each hand. The Father choked up a bit as he told me that she offered one handful to him. This was not the first time, and certainly not the last, that Father Brendan would experience Mexican generosity.