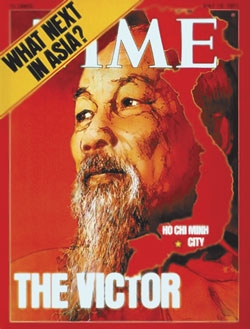 A guard wearing a snow white uniform and a menacing scowl motioned his night-stick at me. Having fallen one step behind, I dutifully adjusted my stride. A man in front of me made the mistake of putting his hands in his pockets. The same security officer prodded him back into submission with a quick jab. I scanned the waiting line and saw sullen faces.

The rules regarding behavior to view Ho Chi Minh’s body blared over the loud speakers during the one-hour queue snaking through Hanoi’s Ba Dinh Square: no hands in pockets, no talking and absolutely no photos. Local devotees and foreign visitors formed two regimented lines, but not everyone heeded the guidelines. I cringed every time my husband slipped out his camera and sneaked a shot of the drab, granite building, flanked by Communist Party and Vietnamese flags. I imagined being hauled off to the Hanoi Hilton Prison if caught violating protocol.

At the entrance to the Ho Chi Minh Mausoleum, considered by CNN to be the world’s 6th ugliest building, the military honor guard enforced the regulations with firmer jabs from well-worn batons. Stiff faced, we filed past the glass sarcophagus where the embalmed corpse of Vietnam’s President and head of the Vietnamese Communist Party from 1945 until his death in 1969, lay in perpetuity, like Lenin and Mao.

The nation’s citizens idolize their beloved and immortalized leader, known affectionately as Ba Ho, favorite uncle. They must have forgotten or forgiven or perhaps never knew his brutal side, when he ordered thousands of North Vietnamese massacred for resisting his land redistribution plan. If confronted with these facts, present day worshipers might shout, ‘Say it ain’t so, Uncle Ho.’

Every year, Ho gets a two month vacation, when he flies off to Russia for his annual re-embalming, like a car’s yearly inspection. He looked ready for a tune-up, as spotlights illuminated his grey tinged face, faded-white goatee and pasty, ashen hands. With silhouetted shadows around the body, the glass tomb resembled a set in Madame Tussaud’s Wax Museum.

The daily line to the mausoleum complex forms at 7 a.m. and extends for blocks. Free to all Vietnamese, followers wait patiently to ‘be’ with the ‘Father of their Country.’ On September 2, 1945, Ho Chi Minh created the Democratic Republic of Vietnam in this very square. He borrowed the passage, ‘all men are created equal’ from Thomas Jefferson, for Vietnam’s Declaration of Independence from France.

As a young man, Ho Chi Minh left his native land, and traveled the world for many years, cultivating his lifelong commitment to Communism and Marxism. While living for a time in Harlem, he developed his disdain for American Capitalism. If he could hear the hawking of French baguettes on every Vietnamese street corner, the sale of knock-off Rolexes and Gucci bags and the surge of private enterprise, he would roll over in his glass showcase and cry out, “Say it ain’t so.”

The only visible Communist vestige left in Vietnam is the single political party system and the not so visible harsh tracking of its citizens’ affairs. Nationalism and Socialism remain the central themes of the government, but Capitalism has exploded and there’s no turning back. Sorry, Uncle Ho. It is so.

In his last Will and Testament, Ho Chi Minh, a name he selected that translates into One Who Enlightens, left instructions for his remains to be cremated. He ordered his ashes to be sprinkled from Hanoi to Saigon, pinch by pinch, so that all the people would benefit from his greatness. He even believed that his dust would improve the soil to spur on agricultural production. Party officials decided otherwise and built the Mausoleum, using materials donated from all over the country. They wanted Ba Ho physically with the people. Now, trapped forever, he seemed to be pleading from his glass prison, “Say it ain’t so.”

Our April, 2015 visit to Vietnam coincided with a national celebration. Every city sparkled with starry lights and spangled banners. The government was preparing for the 40th anniversary of the Fall of Saigon, April 30, 1975—Reunification Day, when the North and South became one under the tight fist of Ho Chi Minh style Communism. Party leaders expected the celebration to inspire a surge of Nationalism. Residents above the 17th parallel showed enthusiasm, but the ‘reunified’ citizens we spoke to in the South reacted coolly. The country’s harmony felt artificial.

For us, Americans who had protested the Vietnam War, these festivities stirred dormant memories. The connection between the two countries cannot be forgotten nor the complexity denied. The US had built the main airstrip for fighter and cargo planes through the center of Da Nang. As we drove on that runway, now a four-lane highway, I thought, ‘Say it ain’t so.’

We arrived in Saigon eager to explore this Vietnamese metropolis that once coexisted with US soldiers. Just outside the hotel, motorbikes created a traffic nightmare, cramming a wide boulevard. Brooks Brothers, Ralph Lauren and Tiffany’s lined the ground floor of a gleaming glass skyscraper. Pandemonium prevailed and capitalism tainted the Asian ambiance. It resembled 5th Avenue in New York City. My husband and I shared a disappointing glance. “Say it ain’t so, Uncle Ho.”