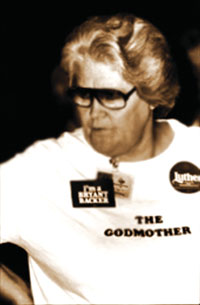 The ghost for this column is somebody I had the honor to meet – and to receive her schooling. It was the election of 1992. I went to the Harris County Democrats office in Houston to get some Bill Clinton-Al Gore campaign material. It was on a counter in front of a large window. There was a woman back there, behind a desk. She noticed me and made a commanding gesture to come in. She got up to shake my hand and said, “Hi, I’m Billie Carr.” She ordered me to sit down and then she began to talk.

I was in the orbit of a major presence. Billie kept me spellbound for an hour. She gave me a lesson in practical political theory. Her passion unyoked her forceful energy.

Billie Carr was affectionately called “The Boss,” and upon learning her nickname, I reflected on her authoritative command for me to sit down in her office. She was universally called the “Godmother of Texas Liberals.”

One of her students was Bill Clinton. He came to Texas in 1972 as a worker for Democratic presidential candidate George McGovern. Clinton’s real interest was his own future, and he wanted to learn campaign fieldwork at the knee of a master. When Billie died at 74, Bill Clinton said, “Billie Carr was one of a kind, a great Democrat and a great citizen. It was a proud honor for Hillary and me to have known and loved her for over 30 years.”

The Houston Chronicle recorded that Billie Carr perfected the art of the “rump convention.” Texas conservative Democrats, before they were converted to the Republican faith, tried to prevent liberals from being delegates to the National Convention. Billie would lead liberals to walk out of the state convention and hold a separate convention of their own to elect delegates. Then they would go to the National Convention, claiming to be the legitimate delegation and demanding to be seated.

The DNC would have to apportion delegate seats, and in this way, Billie could win seats liberals would not otherwise have had. She was shrewd and she was tough. The Houston Chronicle wrote, “During more than 40 years of political activism, Carr sought to advance causes from rights for minorities in the early days of the civil rights struggle, to opposition to the Vietnam War, to more recently emerging issues like environmental protection and gay rights.”

Billie married a steelworker and union organizer. They divorced after 25 years of marriage. On what would have been their 50th anniversary, Billie had a big party. She had half a wedding cake, with only a bride on it. She told her guests she wasn’t going to be deprived of her Golden Wedding Anniversary just because she wasn’t married.

When Billie died of a stroke, there was nobody better to write a eulogy than Molly Ivins. Molly wrote, “Oh, she was so much fun. Irreverent, and improper, and absolutely fearless. And she had the greatest laugh.”

Molly wrote, “When President Clinton got himself into that Monica Lewinsky mess, Billie was pissed off at him as only a woman of a certain age can be about men and their stupidity.”

Molly continued, “Clinton made the mistake of inviting her to the White House. . . .and Billie came through that line, looked the president of the United States in the eye and said, low and hard, ‘You dumb son-of-a-bitch.’ Clinton laughed and said, ‘Billie, I knew you were gonna do that.’”

Billie must have been the only woman in the country who would dare say that to a sitting president.

Having met her, I don’t doubt this story for a minute. Billie, Molly, and Governor Ann Richards were three best friends. They weren’t called “Kick-Ass” women for nothing.

Billie wanted her funeral to represent her political tradition. She said, “I want a balanced delegation of pallbearers – blacks, browns, gays, and an equal number of women. And I want an open casket and a sign pasted over my left tit that says: Hi there! My Name Is Billie Carr.”

Molly reported, “Billie’s funeral was exactly as she wished. There were voter registration cards by the guest book. Hundreds of people were there, wearing tags pasted over our left tits that said, ‘Hi there! My name is . . .’ and people wore old political buttons from ancient struggles. I haven’t had such a good time at a funeral since Richard Nixon died.”

Molly’s eulogy ended in Texas talk: “I reckon Billie’s somewhere up in heaven, in an old-fashioned Texas icehouse, with the ceilin’ fans goin’ and the beer and soda pop in those long ol’ bins full of ice water.”

Few women have “kicked-Ass” in Texas politics like Billie Carr. Too bad she couldn’t be cloned before she died.