Bummer about your old man! 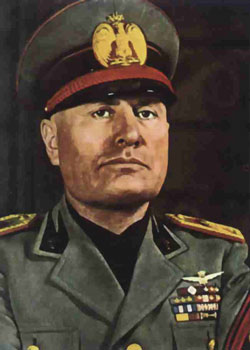 Few people realize that Benito Mussolini was named “Benito” in honor of Benito Juarez, Mexico’s most beloved president. Mussolini’s mother was devoutly Catholic and his father was, like his hero Benito Juarez, devoutly atheist, and wanted to instill in his son ideals of political reform.

Some years ago I was sitting in a little café in Denver eating salami sandwiches and drinking Red Lady Ale with a musician-turned-stockbroker. He told me that while he was wandering through Italy in the late 60s he found himself one afternoon eating salami and sipping on a well-made Barolo with several companions when a heavy-set but sophisticated-looking man walked in and joined them. He was Vittorio M. Mussolini, a prominent filmmaker and the second son of Benito Mussolini, Il Duce, who had been leader of the Italian National Fascist Party and Prime Minister of Italy.

Il Duce—Mussolini—as a young man was a committed socialist, but after fighting for the Allies in World War I he decided socialism was a failure. The British Secret Service helped Mussolini get his start in politics with a salary of £100 a week. By 1922 he was the 40th Prime Minister of Italy and by 1925 he was using the title Il Duce and was almost equal in power to the King of Italy, Victor Emmanuel III. By 1936 his title had expanded to “His Excellency Benito Mussolini, Head of Government, Duce of Fascism, and Founder of the Empire.”

Until the early 30s, Mussolini sided with France against Germany (and had denounced Germany’s racial ideology), but fearing the massive military might of his almost immediate neighbor to the north, on 10 June 1940 Mussolini led Italy into World War II on the side of the Axis. Three years later, with the Allied forces deep into Italy, the Italians themselves deposed him. Ultimately he attempted to escape to Switzerland, but was captured, along with his mistress, Clara Petacci, near Lake Como, where they were executed. Their bodies were hung upside down on meat hooks from the ceiling of a gas station where civilians stoned their bodies.

Mussolini’s fourth son, Romano, adored his father. He became a jazz pianist, married Sophia Loren’s sister, and they gave birth to a daughter—Alessandra. Her aunt Sophia Loren helped lead her toward a career as an actress, although she is equally well known as a glamour model, even posing for Playboy. Alessandra left the film industry after being pressured to change her last name—Mussolini.

Alessandra is a member of the Italian senate, leader and founder of Social Action, a conservative political party, and a member of the European Parliament. She, like her grandfather, is often outspoken, condemning, for example, the Vatican’s comparison of homosexuality with pedophilia—stating “You can’t link sexual orientation to pedophilia.” She has kept her own last name—Mussolini—and has campaigned to change Italian law so that all children, should they choose to do so, may take their mother’s last name.

Well, that summer afternoon back in Italy, sipping fine wine with Mussolini’s son, deepened forever the way my friend looked at life (as well as history). I asked him what he said to Vittorio when Vittorio was introduced to him as “Mussolini’s son.” He told me that was one time he was really at a loss for words. The only thing he could think to say was “Bummer about your old man!”