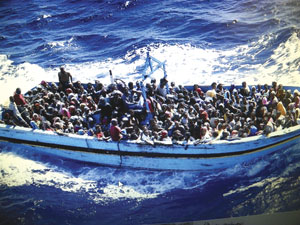 The Tepehua Tribe migrated from Eastern part of central Mexico, where Tepehua is still spoken today. Although little is known about them during pre-Columbian history, they were Indigenous to the mountainous regions North of Veracruz, on the Eastern slope of Sierra Madre Oriental range.

Most migration in those days was Internal...it took years to cover land by foot, donkeys and carts until they found a place to build a better life.  Where-ever they settled they were considered ‘strangers’, and stayed in their ethnic group until they either died out or integrated through marriage or slavery.

Even today in the Indigenous barrios and small towns there exists pockets of migrant families that never assimilated with their hosts. In the barrio of Tepehua the class system exists, (it is not called racism here)...those obvious Indigenous that come from migrant families a century ago, are usually at the end of the pecking order. Nomadic tribes were not considered migratory as settling down in one place wasn’t the plan.

Even today, migration from country to country is seldom considered by the poor or illiterate, unless through famine or war. Since World War II, immigration has changed. There was mass migration through land, sea and air after the war, people fleeing from Britain and Europe...from Germany to England and Ireland and from all of Europe to America, Australia, New Zealand and Hong Kong.

Typically, your migrant is an educated person who has a talent that he can sell better in another country than his own, or for intellectual reasons politically.

That has changed, since we are not so slowly slipping into an intangible World War Three. There is mass migration, wars within wars, poverty and mass destruction.

Mass migration is causing makeshift towns outside major Cities. World-wide, 884 million people live in these towns without access to adequate sanitation,  or water, most of the victims to diseases are children. According to Keith Vaz of the U.K. “All countries that are gracious enough to welcome mass migration due to war, need to think seriously about the practicalities of an integration of a million new arrivals and to remember the values of humanity on which the EU was formed.” Keith states recently “Germany is allowing in more refugees, what will happen to the country as it tries to take on this (Syrians) in a single year? Failing to act and allowing divisions to form within the societies between new arrivals and current inhabitants could have disastrous consequences for the stability of the host country.”

It is unfortunately happening everywhere. In the past history of migration, they trickled in on foot or sea, small groups at a time. There was time for adjustment, slow understanding and accepting the difference....even then, integrating was hard and sometimes took a generation. Immigration was good for the host country, it took not only their physical help but their innovated ideas...intermarriages strengthened the societies in general.

In today’s world, thousands come at one time bringing their old world with them, not looking for change, but looking to change the world. The world has always had wars...but not this kind of invasion, the war has changed to wars within, and we are not ready to deal with it. There has to be a way...but we haven’t found it yet. Walls should be pulled down, not put up...walls haven’t worked in the past, not even Trumps favorite The Great Wall of China...the tide of humanity will always find a way around it. Like a tidal wave, it will affect us all.