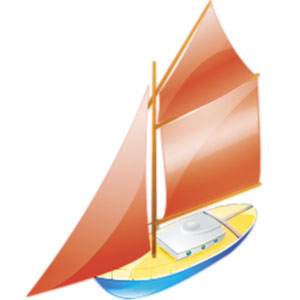 One thing I have learned while living in Mexico is that to enjoy it to the fullest one must be open to new experiences, get to know the people and learn something of their culture and keep your sense of humor. This story is about an unusual experience and finding the humor.

My husband Tom and I spent three idyllic months in Manzanillo enjoying the ocean, great food and paved streets. We had a place right on the beach with a pool and palm trees. We rented this from Roberto, who handles rental properties and who became our fast friend, inviting us to family parties and taking us on many adventures.

Roberto always has a bazillion things going. He has two kids in private school and one in law school so he is constantly looking for ways to make some extra money. One day he came knocking on our door, and said, “Tom! Margie! Do I have a deal for you!! This guy has a big yatch that he wants to sell.

“Yes! That's what I said! It sleeps 15! Tom, you could give harbor tours and take people fishing.”

“And why would I want to do that?” Tom asked.

“Well if you don’t want to do it, I could take them out for you. We could be partners."

Tom looked at me with a twinkle in his eyes, and said, “ We would have to go look at this "yacht" and see if it’s any good. Can you arrange it?”

“Sure, I’ll call you later and tell you when we can see it.”

The next day he called and said we could go on Sunday to look at the yacht and take it for a test run. We picked up Roberto and drove down to the harbor. We walked out on the dock and searched the water. There were lots of skiffs and wooden fishing boats, all in great need of paint and repairs but we saw no "yatch."  Finally, Roberto pointed to this small little boat with a blue canvas awning and said, "It's that one."

"Roberto," I whispered, "That will never hold 15 people. It probably won’t even hold two!”

Roberto looked so sad we didn’t have the heart to be annoyed.

Since we were there we decided to take it for a short cruise and check it out. The owner sent two men along with us.  Our plan was to just cruise down the coastline for a short distance so off we went with a cooler full of cold drinks and some snacks.  We hadn't gone more than thirty feet, when the man acting as the captain said we had to turn back and pick up some extra fuel "just in case." So, armed with more fuel and some extra beer we set off again.

It was a perfect Manzanillo day, cloudless and sunny. We went along to Las Hadas, admired the real yachts, and went out around Las Puntas where the really rich and famous have their digs. We decided to go as far as Las Bouquitas, another beach and then head back because I wanted to be home in time to watch Un. of Conn in the NCAA basketball finals. (One has to have priorities you know).

We got as far as Miramar beach when the boat started acting funny. The self appointed captain said we needed more gas so he put the "just in case" reserve gas in the tank and the motor died. The "captain" tried without success to get it started.  We in the meantime sipped our drinks and watched a large school of fairly large fish jump out of the water all around us.

The captain, now turned mechanic, decided it was the coil, whatever that is, so he and his mate changed the coil and the captain said, “Okay we’re ready to go.” We were ready but the “yatch” had ideas of its own. It refused to start. So there we were, in sight of Mirarmar beach but too far away to swim. I also noticed that we were drifting further out to sea. Roberto brought this to the captain’s attention. The man went into the cabin, found a large cooking pot with a handle, tied a rope around the handle and threw the pot overboard. I looked at Roberto who said “He’s using it for an anchor.”

“I suppose it’s silly to ask if there are any life vests on board.”

Tom suggested that they call the harbor patrol and ask for a tow. Good idea to us, bad to them. No self respecting Mexican macho man is going to be towed back so all his buddies can laugh at him. Instead they called someone and asked them to bring a new battery.

“How long will that take?” I asked. Roberto, looking very forlorn, just shrugged.

Meantime skiffs pulling people on banana shaped floats were going by us as were jet skiers. The second in command could see we were becoming a bit hostile so he got on the bow and tried to wave one of them down. At last one stopped and came along side.

Our situation was explained to him. He scratched his head and looked at us, then at the skiff. He said he would take us in but we would have to ride on the banana. Tom and I looked at each other, shrugged, and said, “Come on, Roberto!”

The captain called out, "Wait! You must pay us for using boat!"

"Keep the cooler and we'll call it even," answered Tom. We took off our shoes, hung them around our necks and climbed aboard. Minutes later we were wading ashore and heading home. 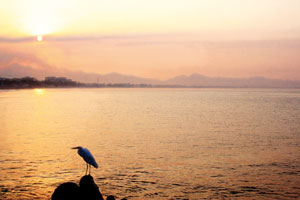 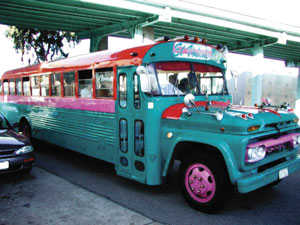