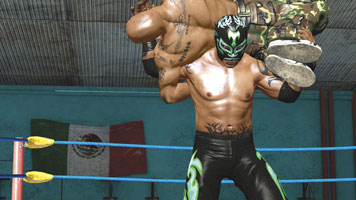 My husband and I recently went to a Lucha Libre event with our Mex-pat group at the Arena Coliseo in Guadalajara. Neither one of us had ever been to one, but had heard from friends that it was a “must see.” Now, I am not an expert on wrestling, but in raising four boys, I was exposed to American wrestling. Two of my sons wrestled in high school, one in the heavy-weight and one in the light-weight competitions. Of course, this is no comparison to the WWF and Lucha Libre events, but the rules are basically the same.

Most matches have an average time limit of fifteen to twenty minutes, and there are four ways to win or lose a match. In a Pinfall, the wrestler holds his or her opponent’s shoulders to the mat for a count of three. Submission is when a wrestler locks his opponent into a painful hold. The loser signals to the referee that the pain is too great, giving up the match. A Sleeper is when a wrestler uses a choking hold on his opponent, rendering him unconscious…. of course, they do not allow this one in high school wrestling. A Disqualification happens only if the referee sees the disqualifying maneuver, which seems to be not very often. When an active wrestler stays outside the ring for a count of ten or when wrestlers group kick one opponent or hit them with a foreign object, as in the case of WrestleMania IV when Hulk Hogan and Andre the Giant beat each other with folding chairs, which resulted in a double disqualification.

The Luchadores (wrestlers) were colorful, flamboyant, and entertaining. They varied from quite tiny to huge. However, they were all very acrobatic, and each round was well-synchronized. One wrestler threw tortillas into the crowd that they used later to throw at the loser.

Tortillas weren’t the only edible thing at this event. Vendors wandered through the crowd selling beer, donuts, popcorn, fruit with chili/lime salt, and pork skins that tasted kind of like Funyuns, a lot of which ended up on the floor due to the jumping up, cheering and fist pumping the air while trying to eat.

There were seven Placard Girls. Their job was to carry the card that tells you what round it is and to provide entertainment between matches. All the girls were beautiful with lots of “junk in the trunk” which they proudly displayed and wiggled a lot. But, I think it would have been much more entertaining if they were choreographed to the heavy beat music that was playing between matches. It was as if each girl had completely different music playing in her head.

I don’t know if it was my inappropriate violent inner child, but I would have liked to see some fake blood. You know when the good guy fake hits the bad guy in the face, there could be a bit of red to stir up the crowd (like they weren’t stirred up enough.) Then, my ever-tolerant husband reminded me that there where children watching…..Oh, snap. Speaking of the kids, there were many, and they were just as wound up as their parents. Some were wearing their favorite wrestler’s mask. I loved that the winning wrestlers at the end brought their fat champion belts out and posed with the kids for photo ops. The kids just ate it up!

It was also, I am rather embarrassed to say, the most fun I’d had in quite a while!