Undocumented Mexicans and the 2016  U.S. Elections 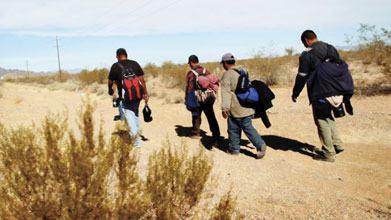 The spirit of Navidad has yet to spread throughout el Norte. It’s not heard in the platform of candidates who conjure up images of herding 11 million undocumented Mexicans (man, woman and child) on to box cars and shipping them back to where they came from – south of a very big fence.

Why has this become such a militant issue?

Take a look at recent immigration trends. According to Pew Research Center, since 1965 the number of “foreign born” living in the U.S. has quadrupled.1 In that year the law was changed to put an end to a quota system that favored immigrants from northern Europe. Then came increasing numbers from Latin America (mostly Mexico). The trend has now shifted to immigrants from Asia, notably India and China.

From this, a not so startling finding emerges. Over the last 50 years, whites have gone from 84% of U.S. population to 62%. 2   The prospect of whites soon losing majority status rattles a lot of them. Will not a “path to citizenship” speed that process? So, it’s really not surprising that anti-amnesty rhetoric grabs a lot of attention on the campaign trail. It’s because it plays to those who were already uneasy.

The anti-immigrant crowd can latch on to one or more factions. They are not mutually exclusive.

Nativism: One might think nativism means giving the United States back to Hiawatha’s offspring. Nope. It means granting “favored status” to established inhabitants. Just what does established mean?   Descendants of the original 13 colonies? Surely it’s broader than that. Still, the Iroquois and other real natives need not apply.

Exceptionalism:This is the notion that the U.S. was destined by God to spread its values. It has Anglo/Saxon roots. It exempts exceptional nations from standards that apply to unexceptional nations. (Witnesseth: President Polk provoked a land grab war against Mexico under the banner of “Manifest Destiny” – this despite vigorous objection from Abraham Lincoln, then a U.S. Congressman.) Exceptionalists also fret about maintaining U.S. purity –   they infer that Mexican newcomers will not assimilate; will continue to regard their home as Mexico; and will prefer Spanish over English.

Illegality: We are a nation of laws – “they” (undocumented workers) are illegal and therefore must go. But the problem is one of complicity. When “they” sneaked in, “we” turned a blind eye because “we” needed them to   pick berries and change hotel sheets.

Wages: The argument is that illegal Mexican workers compete for unskilled jobs and drive down wages. Yes, but low-paying jobs performed by Mexicans make everything from avocados to zucchini cheaper. The same can be said of construction costs, fast food, and hotel rooms. By spending less as consumers, the United States is better able to compete in a global economy.

Drain: Here the argument is that illegal workers generally do not pay income taxes and that they increase school and welfare costs. But they do pay sales taxes and renters indirectly pay real estate taxes. And, they pay a whopping thirteen billion dollars annually into Social Security and only get one billion back .3 But whether they do or don’t pay their fair share of taxes, they contribute to the economy by shopping in stores, buying cars and paying rent – in other words, they spend money just like everyone else. Do we want to take 11 million consumers out of the U.S. economy?

Protectionism“ Buy American” is an economic philosophy that shields domestic industries and workers from global competition by taxing imports. It should not be a part of the immigration debate because it has nothing to do with it.

Compositional Amenities: This is a hypothesis (distilled by Thomas B. in a 9/2/15 New York Times editorial) as the “comfort of a common religion and language, mutually shared traditions, and the minimization of cultural conflict.” It holds that immigration changes the composition of the local population, threatening the “compositional amenities” of neighborhoods, schools and the workplace. Maybe so. But isn’t diversity the spice of life? Leave that one for scholars to ponder.

From the Far Right: “The situation is simple. A hostile foreign power is using its criminal under class to colonize the United States. The federal government, having been hijacked by the radical left, is doing everything it can to assist this invasion, in the belief that creating a massive new under class and reducing Caucasians to minority status will give them the demographic leverage to impose socialism and one party rule.”4 And just when you think there can be no more, along comes Ann Coulter’s new best seller, ¡Adios, America! – The Left’s Plan to Turn Our Country into a Third World Hellhole.

Fear Mongering: Undocumented workers are “rapists, murderers, and carriers of infectious diseases.” Really? And what do they say about drug trafficking? Build a wall? Does anyone honestly believe that hermetically sealing the Mexican border (were it possible) will make any difference? If traffickers from Bogotá can smuggle cocaine to Amsterdam, can’t they figure out how to get it to Milwaukee? Cartels already have fleets of airplanes, refueling islands in the Caribbean, fast boats, and submarines. And they know all about air-conditioned tunnels with carts that speed on lighted underground tracks. Better not count on Mexico pitching in pesos for the “Great Wall of Mexico.” It won’t happen.

Where does all of this leave us? Illegal immigration is often explained in “push-pull” terms, namely, that Mexicans come to the U.S. because there are not enough jobs in Mexico (the “push”), and, Mexicans working in the U.S. earn many times more than what they could earn in Mexico (the “pull”). But wait. According to the Mexican Migration Project at Princeton University, since the 2008-2009 financial meltdown the population of undocumented workers in the U.S. actually fell and Mexicans without documents did not migrate at a pace to replace the loss, thus creating a net zero balance for the first time in 50 years. 5

Will a net zero migration pattern drain the U.S. of an essential labor pool? The Christian Science Monitor asks: What will happen if the workers that farmers, hotels, and restaurants have relied on for decades aren’t available? Will this have a ripple effect on the rest of the U.S. economy?6

Law makers are in a pickle. They are keenly aware of the importance of the Hispanic vote. They know all about the contributions undocumented workers make to social security and to the economy. In their hearts they know that many Mexicans who cross the border in the black of night have become deeply rooted in the U.S. with families, friends, and community connections . But they are faced with pockets of constituents who bitterly oppose a “path to citizenship.” Maybe lawmakers need to take a hard look at Luke 10:27, Romans 13:10, Matthew 25:35, Leviticus 19:33-34, and the many other Biblical messages about “welcoming the stranger.”