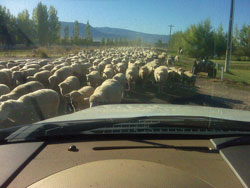 Driving in Chapala has been very difficult for the last four or five months, and it doesn’t look like it will get any better in the near future. I know there are many of you who have been dealing with your own problems in Ajijic, and that you don’t get over to Chapala very often, so, I’ll let you in on a little secret. Use defensive driving! And make sure you know your way around Chapala!

Prior to the holidays, the powers that be started remodeling the central plaza. Our Christmas décor was limited, our taxis were misplaced, the telephone stand inoperable, our vendors vacated, and one of our busiest streets was closed for one block. Pedestrians, busses, those who used taxis and drivers all set in for a long-term inconvenience in the hopes that the overall result would be for the best.

Shortly after that, however, the main road in front of Christiania Park started major renovations. The aforementioned busy main road was now closed at the main street and at the park. Or, according to the locals, alto y debajo, the top and the bottom.  Those of us who lived in between on this one-way were now navigationally challenged. We could no longer legally drive to our houses, or on several of the alternate routes due to the large amount of construction.

It is not unusual right now to take an alternate route only to get to the block before exiting on main street, and find that it, too, is closed. Now this is causing quite the conundrum. I am going left to go right. North to go south, east to go west, and my four-letter-word vocabulary is getting a work out.

One morning I drove down my street, dropped my husband off, and drove around the block.  By the time I was to turn back on my street…it had been closed!  An attempt to pick up my maid one morning turned into an entire loop around Chapala—a quick 5-10 minute round trip took 30 minutes!

How to spot a closed street in Chapala? Guess! OK, most of the time there is yellow police tape across the road.  You can’t see it until the car in front of you stops, pauses, hits reverse, sees your car, then turns left or right. Then you figure out why when YOU see the yellow tape. Of course, sometimes there is a hazard sign in the middle of the road. Sometimes there are just trucks parked horizontally to stop further progress. And of course, there is always the good old standby: The guy in the orange vest waving wildly at you.

It certainly isn’t unusual to find someone driving the wrong way down a one-way in Mexico. But in my neighborhood it has become the standard--as is driving in reverse down the one-way. I did that until I took out a tail light one day. So now I just stick to driving the wrong way turning around and finally parking at my house.

Eventually, the plaza was finished and the upper road to the main street was opened. But the vendors were not allowed back on the plaza. So the parking spots they took to sell their wares are still occupied, as if there is an abundance of parking in Chapala? I’ve spoken to many of my Mexican friends. They are unhappy that their shopping and their vendors were displaced over the Holiday season hitting them hard during a very difficult year. Still they haven’t been allowed back in the plaza.

It isn’t just the parking and driving that has been inconvenienced but both the plaza vendors and the stores along the street where their access has been limited. Of course, rumors abound as to the various reasons why they aren’t back in the plaza. But I don’t hold much to rumors, since they are abundant and truth seems elusive.

Meanwhile, our wonderful climate decides to add a burden to the entire process of change. Unseasonable rains have slowed the progress, and in one case, completely washed out the newly opened pathway that was the entrance to our street. So for a brief few days we were actually able to drive to our houses legally. But we are now back to driving the wrong way.

The amazing thing about all this is how everyone seems to adapt. Perhaps this is fortunate, because the project in Chapala near the park will take a very long time. Homeowners who live on Gonzolez Gallo are the most inconvenienced. They have lost their sidewalks, easy access to their homes, their water has been turned on and off many times. Some small abbarotes have changed their hours, and built make-shift entrances. But everyone seems to come together to try to make this all work.

Meanwhile the rain and the heavy trucks going to the construction site have taken their toll on Morelos. The street is barely passable with sink holes and pot holes. The workers still seem to take it in stride. They work using mostly hand tools and wheel barrows. They direct traffic around trucks bringing in supplies, and the normal traffic just trying to get where they need to be. They stand with their orange vests and wave the traffic with their orange flags. Always smiling, I wonder if their arms ever get tired?  We’ve been complaining about the weather, how do they feel about it?

People who live in Chapala wonder how long this entire project will take.  Some said it was to have been completed by Carnival—which has come, and gone. Others are saying three more months, while others jest, no, three more years!