—the rare place where environmentalists and energy advocates agree! 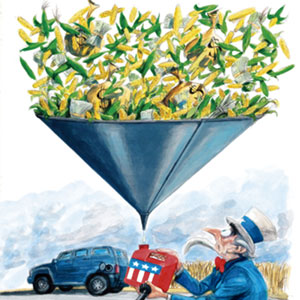 We all expect to pay a price for missing deadlines—but not the Environmental Protection Agency (EPA). For the past two years, the EPA has failed to meet the deadline under the Renewable Fuel Standard (RFS), requiring the agency to tell refiners how much ethanol to blend into gasoline.

In November 2013, the EPA did make an attempt to announce the proposed 2014 blend levels—which by then was already months past the legally mandated deadline. The EPA set the proposed 2014 standard to a level lower than 2013’s, even though the law requires increasing amounts. Ethanol producers, who were expecting the usual uptick, loudly opposed the reduction. They made so much noise, the EPA agreed to reconsider. To date, the 2014 standards have not yet been announced.

Then, in November 2014, the EPA announced it would make a decision next year (2015) on how much ethanol refiners had to add to gasoline in 2015. Congress enacted the RFS in 2005 and revised it in 2007—which also provided incentives to America’s fledgling ethanol industry. At the time, gasoline demand was rising to an all-time high and oil imports comprised more than 58 percent of U.S. oil consumption.

Then the world changed. The U.S. economy plunged into its worst recession ever, unemployment soared, and gasoline demand fell sharply. Meanwhile, advanced drilling technologiesbegan producing oil and natural gas from U.S. shale formations. With crude oil supplies flooding the market, prices have been cut in half. Although fears over foreign-oil dependence have abated, the U.S. remains stuck with an ethanol mandate that is outdated, unworkable, and even harmful to vehicles, engines, and the environment.

Additionally, studies indicate ethanol usage increases greenhouse gas emissions. Politico reports: “Some green groups have vocally abandoned their support for corn ethanol, blaming the crop for polluting water supplies, wiping out conservation land and even increasing carbon emissions.” According to Craig Cox, director of the Ames, Iowa, office of the Environmental Working Group, an environmental group that opposes the mandate as it is now structured: “Corn ethanol’s brand has been seriously dented in the last 18 months. …it certainly doesn’t occupy the same pedestal that it occupied two years ago.”

But then, politics entered the scene. Rumors flew that the announcement of the 2014 blend levels was delayed to help Rep. Bruce Braley (IA-D) in his Senate bid. Braley was pushing for an increase in the proposed levels and was hoping that he would be able to influence the White House to raise the targets. Politico quotes Braley saying: “Voters in Iowa look at where I stand on this issue and where my opponent stands, who’s supporting me in this campaign and who’s supporting [Ernst].” The Politico story states: “Iowans say wavering on corn ethanol once would have been certain political suicide in a state where 90 percent of the land is farm acreage. So Braley sought to capitalize on Ernst’s expressed qualms about big government, portraying her as someone Iowans can’t trust to fight for them.” Yet, Ernst, a Republican, won the Senate seat formerly held by Democrat Tom Harkin by 8.5 percentage points.

On top of the usual problems with ethanol, the EPA’s unwillingness to do its job by setting blending level volumes—along with ethanol’s loss of political heft— should provide the impetus for ending the complex and wasteful RFS program. Ethanol is a rare topic where environmentalists and energy advocates agree. Now it is time for our elected officials to join the people. As soon as Congress convenes in January, it should get to work to reform or even repeal the RPS.