Can You Do This Crossword Puzzle?

The key to most crossword puzzles is that the answers to the short, clever clues would be subjects most people know. If this weren’t the case, how would tens of thousands of us every day, when left tranquilly to our own thoughts, escape from the tedium of waiting at TelMex. A clue, for instance, to the name Einstein might be ‘Genius in New Jersey – (8)’ (that’s eight letters), which might baffle some, given that we also have Edison (only six letters) and Valli (only five). But it is nonetheless a clue that would be recognizable for many on the planet, because the subject is someone everybody knows. But what if you lived in a closeted society, where people don’t really know what’s going on in New Jersey, or care, for that matter?

Crossword puzzles and, I imagine, any word games might be rather esoteric in these societies. Because many of these society members wouldn’t recognize what we consider common knowledge, the globe’s universals. So then, their crossword puzzles would have to be based on the limited, specific and permissible knowledge base of that particular closeted society, if, of course, they were going to have any real crossword fun.

I found the following Taliban crossword puzzle to demonstrate what I’m talking about. It was the feature puzzle in a whimsical little chapbook called Favorite Mind-bending Crosswords and Riddles from the Jihad Picayune.

Cut it out if you like and keep it for when your iPhone battery goes dead or you’re sitting around waiting at TelMex. 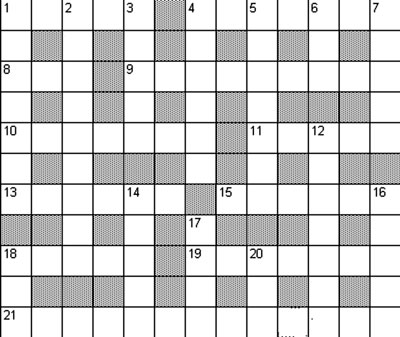 9. IED experts meet at what coffee restaurant because of free WiFi? (9)

5. Preparation of which explosive substance linked to ED? (7)

7. Science studies for women held in which volcanic crater? (5)

14. What to wear while hiding in a kindergarten school? (5)

20. Where Jalalabad residents who stutter go for counseling (3)

If you were able to get any of these right, speak to no one. Anyone knowing even just ‘8 across’, a subject that has been a top-secret for several decades, probably will receive fewer party and event invitations. (Hint: Imaginary friend is not unlike a certain mascot for a Philadelphia baseball team.) Nonetheless, please don’t let me discourage you from completing the puzzle. Those who can will be awarded with a gold-plated Kalashnikov automatic weapon, custom designed to fire a little flag that says, “I am Charlie.”