Advice to the Lovelorn, the Terminally Confused and the Maliciously Malcontented 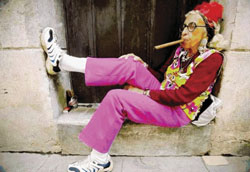 I recently busted my bum. Through a series of less than optimal choices it took quite a few days for me to obtain the medical help I needed. Ultimately the parts that had broken were removed, and a delightful French modern sculpture, which also functions as prosthesis was inserted and the period of healing began. So far, so good. Though we single old bats who insist on being on our own tend to encounter many challenges, things began to resolve for me and with the help of a few villages and an urban suburb of friends I have become ambulatory.

Then it started! I began to channel a certain legendary feminist poetess who shared this quaint corner of the world with us all. Though really quite lovely, she had a sort of domineering willfulness that served to repel the very people that loved her! I never wanted to grow up to be that, yet I find myself from time in an altered state, and some Higher Consciousness lets me know that I have become her channel.

So, how do I stop being a channel? I have changed medications a variety of times, and ceased to eat sauerkraut before bedtime – but nothing had changed. Is it really possible to channel an entity that is still active on the planet? Is there any chance you could put me in contact with the late Dr. Roberto Moulon? Something tells me he would be able to help.

I know that you have not been writing for a while, and I would never invade the tranquil simplicity of your retirement were I not FREEKING desperate!

The late and still highly-esteemed Dr. Moulun was a good friend of mine, and I think he would tell you what I know he told so many of his female patients here at Lakeside: Stop acting crazy or I’ll take a rubber hose to you! This advanced form of therapy almost invariably worked. By the way, your list of injuries does not mention the one part of your body that was obviously most damaged: your head.

Further, if you are going to channel anyone, select someone far more admirable than your current muse, say someone like . . . Helen Keller.

My recommendation is, of course, a subtle way of getting you to shut up! You didn’t get it, did you? I told you about your head! Try to keep your sniveling to yourself.