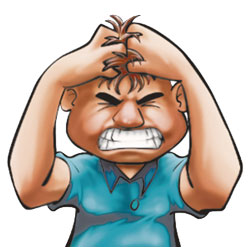 Oh, how I hate dripping faucets! The one in the kitchen could be heard all over the house because of the stainless steel sink, making a sound like “boink!” every time a drop fell. A couple of days ago, I decided to take the bull by the horns and see if I could stop the leak. I turned off the water with the under-sink valves and took the handles off the faucet and progressed (regressed) from there.

Thinking that the cold-water side was the culprit, I took out the works to see if the rubber washer was worn out. It and the O-ring appeared to be in order, so I removed the hot-water works. When doing this, I noticed that the cold-water side had a red washer and the hot-water side had a blue one. I’m a stickler for this sort of thing, so I swapped them out. I put everything back together, and the faucet still leaked.

I turned off the valves under the sink and vowed to look at the situation again the next day. Guess what? The faucet STILL dripped with those valves closed! And water was running out from under the fixture and into the sink - something it hadn’t done before. And I hadn’t messed with the thing at all! Well, it’s time to call the plumber.

Remembering what a good job Gillo did on the plumbing I hired him to do before, I decided to give him a call and have him do the work. Maria went to the local hardware store and bought a new fixture, new cut-off valves, and new flex-pipes so that Gillo needed to bring only his tools and his expertise.

He showed up shortly after six o’clock last evening and went to work on the problem. He does his work with a great deal of care and concern. He removed the entire sink so that he could do the work more easily and do the installation right. He needed caulk and plumber’s tape from me, which I was happy to provide.

When I handed him the caulk and caulking-gun, I showed him how I preserve a tube of caulk that has already been opened and partially used. I place a small stick (like a dowel) into the opening and close it off with an unused cap. Every new tube of caulk comes with a new cap, so that’s easy to obtain. The cap (or “spout” if you prefer) from the previous job is used to do the current job. Gillo told me that he usually uses a nail to seal a partially-used tube, and I told him that I’ve done that before and found that the nail will rust from the moisture. I think he was impressed with my method.

I don’t like to “hover” over folks when they’re working, so I left him on his own for a while. When he had the fixture attached and was preparing to replace the sink, I took the liberty to examine the installation. I realized that the faucet was backwards -- the engraved name of the manufacturer was on the back side instead of the front. I told him what I had noticed, and he asked: “There’s a name on it?” I showed him the old faucet and realized then that the reason that the red and the blue washers were reversed was precisely the same thing: Whoever installed it had put it in backwards!

So Gillo removed the new one and turned it around before replacing the sink. Then he caulked around the sink -- something that most Mexican “plumbers” don’t know how to do!

When it came time to clean up, he placed my “dowel” back into the mouth of the tube of caulk, but he had to ask me how to remove the caulk residue from the spout he had just used. I took the stick from the tube and ran it through the spout under running water and cleaned it up for the next use. I think Gillo learned a little bit of “trickery” from me.

Okay—time to settle up, after between 1-1/2 or 2 hours of work. How much? He said, “Fifty pesos.” WHAT? That’s less than five United States dollars! No, at this time of year, Maria and I wouldn’t feel right, especially since he has five daughters. (But guess who I’ll call for the next plumbing job!) So, Maria gave him three-hundred pesos, still a bargain.