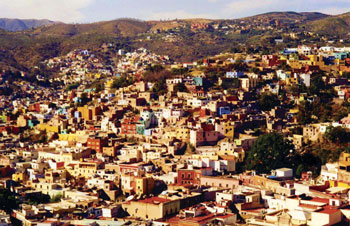 The first sight of Guanajuato is breathtakingly beautiful.  Thousands of brightly colored buildings are draped across the hills like a mosaic carpet, and the colors are warm in the morning sunlight.  It’s picture postcard perfect.

Guanajuato has played an important role throughout much of Mexico’s history, including its service as one of  Mexico’s provisional capitals  up until its capture during the French intervention in 1863.

This city’s spirit is well summed up by its  Plaza de la Paz – the Peace Plaza.

This is where the wealthiest of colonial families built their homes.

It is also the site of the Basílica de Nuestra Señora de Guanajuato – the Basilica of Our Lady of Guanajuato.

One of the plaza’s most distinctive feature is an allegorical sculpture of the woman “Peace”.

Since much of Guanajuato’s through traffic has been routed through the tunnels of abandoned silver mines which run below it, the narrow streets of the Centro Historico are very pedestrian-friendly, and beg to be walked.

The Alhondigas de Granaditas – The Granary – dominates the  old city, and has played a central role in its history for more than two hundred years.

Today it is one of the venues for the Festival Internacional Cervantino, held here every fall since 1972.

The festival  celebrates the life and work of Miguel Cervantes, who is considered by Spanish-speakers to be as significant an influence on their literature as Shakespeare is to English literature.

The Alhondigas is best known, though, as the site of the first battle in Mexico’s War of Independence.

In 1810, insurgents led by patriot Miguel Hidalgo entered the city to find that Royalist troops and  sympathizers had barricaded themselves – and millions of pesos of silver – in the Alhondigas.

The Royalists were counting upon the granary’s thick and windowless walls and single gated entrance to resist a siege, and they were able to fight the rebels to a stalemate.

The impasse was broken when miner Juan José de los Reyes Martínez, better known to history by his nickname of El Pípila, armored himself with a large flat stone strapped to his back and crawled to the wooden gate with a flask of tar and a torch.

Martínez’s  courageous act enabled the patriots to take the building, and his heroism is commemorated by a colossal statue of him that now overlooks the city.

The building now serves as the Museo Regional de Guanajuato, documenting the city’s history  from before the Spanish Conquest.

Its architecture honors heroes of the Mexican Revolution with mascarons, gargoyle-like sculptures that incorporate their faces.

The walls of the main stairwell contain murals by José Chávez Morado that allude to Independence, along with paintings and photographs.

It is a long-standing tradition to celebrate Mexico’s Independence Day with a reenactment of Miguel Hidalgo’s “El Grito de Dolores” – the call to arms – in the Alhondiga’s large courtyard.

An eternal flame is re-lit here each year on the anniversary of the battle.

It ‘s no surprise that this charming and historic city is one of Mexico’s thirty-two World Heritage Sites. 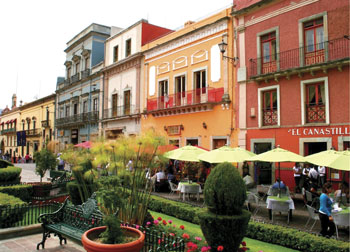 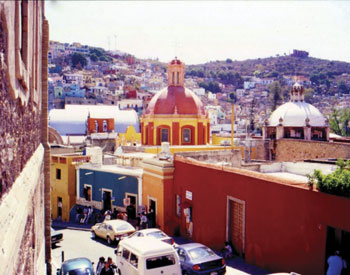 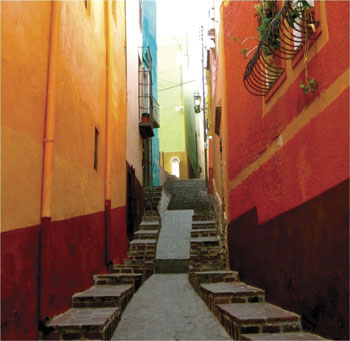 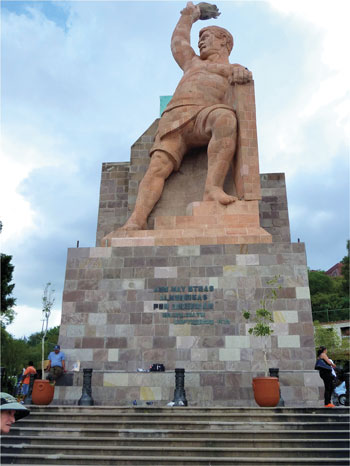 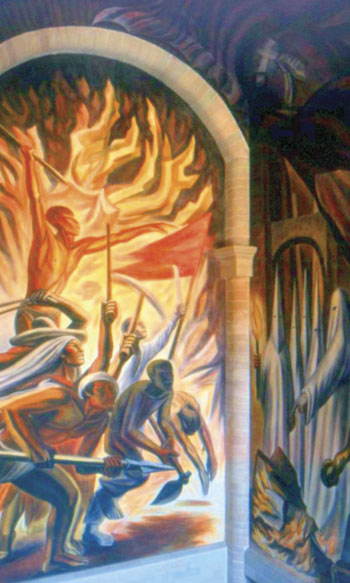