Breach Birth Of The Second Amendment 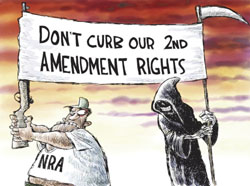 How could America’s brilliant Founding Fathers, products of the Enlightenment, men of learning and culture, country gentlemen, sages and scientists, have so casually conceived a declaration as broad and unqualified as the 2nd Amendment to America’s admired and often emulated federal constitution, a declaration giving everyone in the nation the right to own firearms and eventually shoot everything from game to anybody wearing hoodies?

It’s 1790, the War for Independence is over, and the American Constitution is being amended with the addition of a Bill of Rights, which includes the indiscriminant right to bear arms. Let’s look at how this happened:

The 2nd Amendment was originally intended to authorize the arming of militias to fend off invaders and protect individual communities from enemies like rogues from Newfoundland who wanted to join the union, the Spanish who seldom ventured into climates below 60 F, and native Americans who’d already been shuffled off west of the Mississippi – all very unlikely threats. And remember, the Mafia hadn’t arrived yet.

In this context, the idea of post-Revolutionary War local militias never caught on with any degree of dedication or even organization, because:

Militia membership was often a tedious, low-paying job that interfered with a man’s personal and family life and the time he could spend in the local tavern.

A militiaman had to provide his weapon at his own cost. (The purchase price of muskets could be quite high then, averaging around $12 which could be a monthly salary for many, circa 1790.)

In addition, militiamen also had to own sufficient ball, powder, flints and other miscellaneous cleaning gear, when all they really wanted was that new-fangled “rocking chair,” which had just been invented.

It was post war. Men were tired of fighting. And what do men do who are tired of fighting? They have babies, lots of babies. So there was a baby boom, and wives said forget the rocking chairs, “Get ye posterior out there and feed this family!” So militia recruits were in rather short supply.

At six feet tall, the ungainly musket wasn’t just a weapon. It was a high-maintenance obligation, harder to keep clean than a dune buggie. For most muskets their reputation for reliability went something like this:

Each musket needed constant care to keep the barrel free of ash or soot and the ever-present corrosion, or else one shot could cost the shooter a thumb and an eyeball.

If there was any humidity in the air or if the firer’s hands were sweaty, which they often were considering the owner’s anxiety over a possible backfire, the shot could land you on your butt in the mud looking up at an enemy bayonet.

It took 20 seconds to load one shot in a musket and fire. So much for “Cover me, I’m gonna charge the bastards!”

Muskets seldom hit anything beyond a few yards away, at least not intentionally. During the War for Independence, British soldiers were more likely to be killed during a pillow fight than by an American musket ball. (Remember Alexander Dumas’s Musketeers? Dashing. Clever. You ever see them depicted with muskets?  Possibly only if their enemy was sitting in his living room napping.

The famous weapon was invented in the late 1400s and hadn’t changed much in three hundred years.  Pitchforks and axes were also carried by over 25% of American soldiers during the War for Independence. Although low tech for the time, the pitchfork and the axe generally landed where you pointed them.

Musket proliferation seemed innocuous for as long as 70 years, until the musket was transformed into a practical version of the more forbidding breach-loading rifle – the next big ballistics breakthrough.

So the 2nd Amendment was conceived around these two truths:

In the aftermath of war, not many folks really wanted to march around in the cold at a moment’s notice carrying a weapon taller than them and pretending, despite the eye patches and missing fingers, that they’ve tended to its care and maintenance.

More importantly, it was commonly accepted that even a well-tended musket wasn’t really going to hurt anyone, unless somebody tripped over it.

So the vote was in, an all-male vote, of course. Let everybody snap up a weapon, hang it over every hearth to look tough and prepared, and then learn how to hunt with a bow and arrow. So what I think the 2nd Amendment means is that every American should have the option of owning an 18th Century musket.