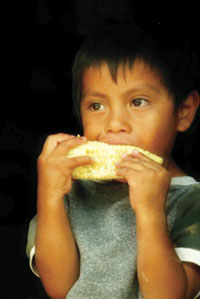 It is early evening, and the doorbell rings. Thinking it is our dog walker, I leash up the dogs and walk them to the garage door. I open the door, but it wasn’t him. Instead a young man stood there, and asked for me by name. I don’t know him. He is a stick of a man, with tussled hair and deep brown eyes that are sending me messages. He gives me a name of someone I don’t recognize. He tells me he needs work because his family is starving. In fractured English he tells me they don’t have food to eat. He will do any kind of work.

I stand there with my two anxious dogs pulling at their leashes and jumping for attention.  I’m in my pajamas. I don’t know what to do. This isn’t the first time someone has come to my door asking for help. It won’t be the last. Our dog walker comes by and relieves me of the dogs, and I went to go get pen and paper. I ask the young man for his name and number, and I promised him I would put his name with another man I know who runs a free job service. But I have no job openings for him. I wish him luck in my fractured Spanish. And shut the door. I feel useless.

Not a day goes by when I am not haunted by the look in his eyes; his slight frame. His desperation. I try to imagine what it would be like to go to a stranger’s door and beg for help. He never asked for money. He asked for a job. I gave his name to the man who runs the job service, and kept a copy for myself. The job service has 500 people with the same skill set as this young man.  He told me he would do gardening and cleaning—“just anything.” I wondered how much education he had?  Did he ever train for a vocation?

Meanwhile, another family took up on the corner of Madero and Guerrero in Chapala.  A couple with their two children, one just an infant. They begged for food and work. Friends and others would give them food. After two weeks, they disappeared. Whenever I pass that corner, I wonder where they went?

No long ago, a woman came to our door with a note. I couldn’t read her note. I asked her to meet me with a translator the next morning. Her need was urgent, and her distraught expression is etched in my memory. Whatever it was, it was bad. I asked my husband to be there with me then next morning. It turned out her four-month old son had died after a surgery. The hospital would not release his body to her unless she paid the $700 pesos left on the bill. All she wanted to do was bury her dead son. This was no act. Her weeping was that of a mother who lost her child.

We help when we can. There are many things about this adopted country I do not understand. But I know there is poverty everywhere, even in the USA. I know many of us at Lakeside try to help in our own ways. Yet I feel so helpless, sometimes hopeless.

There are those of us who have so much by comparison, yet complain about their lives. I prefer to concentrate on how much I have, and how much I am blessed—with a wealth that carries no decimal points.

(Ed. Note: I have also had many strangers knock at my door, and while perhaps some were hustlers, the great majority were truly poor: the deprivation showed in their bodies, the desperation in their eyes. Most newly arrived ex-pats have never seen such poverty before, and something I have heard from them time and again is this: I don’t think I’ll complain about anything in my life ever again.