Meant For Each Other

Of the many experiences during my first years in San Antonio Tlay., one favorite is about a brown stallion named Lassie. Why he was given that name is anybody’s guess. I recall wondering at the time if he might be gay.

Lassie’s home base was an adjoining plot of land whose stony dirt was sparsely populated with a blade or two of grass, and one lone tree. Our property was separated by a chain link fence which played an important role in the Romeo-and-Juliet-like romance to come.

One of my dogs, a female Siberian Husky named Ninotchka, immediately fell wildly in love with the horse. This was quite something, since Ninotchka is an aloof creature who chooses to associate only with other Huskies, the occasional Malamute, and my longtime Ajijic buddy, Tom Faloon.

From the minute dog met horse, it was true love. It might’ve even been obsession since, for the first time, Ninotchka refused to come when called, insisting instead on remaining at the fence and French kissing Lassie through the openings between the chain links. Lassie was even more intensely enamored and kissed back with a tongue longer than the red carpet on Hollywood’s Oscar night. Doubting human friends came to witness this phenomenon and walked away true believers.

Soon Lassie’s enthusiasm broke all boundaries of civilized behavior and his ardor was aroused for all to see. He whacked frantically at the fence for immediate admittance, leaving hoof dents in the chain link as mute evidence of his passion. Those depressions in the fence are still there because I recently looked.

Lassie was, it seemed, frequently without water or food. Being the kind (spelled n-o-s-y) person that I am and since he was practically my son-in-law, I filled water buckets, lowering them by rope over the fence. They should have named that horse “quick draw” because he slurped the entire contents with one pull, requiring my frequent return to the spigot for refills.

Since what I know about horses you could easily put in your eye and still have room left over for a dozen cataracts, I repaired to SuperLake, returning with a carton of Quaker Oats and a carrot. Lassie must have taken lessons from Man O’ War, for, when he caught sight of the carrot sticking out of the groceries, he raced at me so fast, I hastily hurled everything over the fence, and he all but inhaled not only the contents, but the bag they came in.

I respectfully asked for and was granted permission to continue feeding and watering Lassie by the owner, who was father to a schoolmate of my housekeeper’s son. Next day, on Lassie’s side of the fence, mysteriously appeared a magnificent carved stone basin. I learned that Lassie’s owner had said, “if the Señora is kind enough to feed our horse, she should have something beautiful to put the food in.”

Encouraged, I found a feed store in town which delivered hay. I’m certain Lassie appreciated this nutritional improvement, since he had been enjoying his Quaker Oats dry. (“Got milk?”)

What’s Romeo and Juliet-like about this story? After returning to the States for work reasons, I learned that Lassie had been sold to someone in Chapala, though I have been unsuccessful in attempts to locate him. I hope he is happy.

Ninotchka never loved again. I’ve often wondered what their offspring might’ve looked like, had the separations in the chain links been large enough to accommodate Lassie’s rising desire for Ninotchka.

Our California mountain cabin is near the village stables and, to this day, the only time Ninotchka springs into action is at the sight of a horse, any horse. She does not rest until she has sniffed to her satisfaction that it is not Lassie, and dejectedly turns away.

Certain living things are meant for each other, whether it be a caballo and a canine, or a lady and a lake. 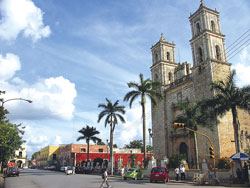