THE “DEATH” OF ELVIS
—Another Perspective 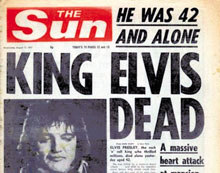 The most notorious case I undertook was a lawsuit against Elvis Presley—the “King of Rock and Roll.” After the last show of his appearance, Elvis would have a party in his room for all the unmarried women. Ralph Warner and his girlfriend, Gina De Marco, attended that last show, at the Sahara-Tahoe Hotel, and Elvis announced his invitation. Gina begged Ralph to let her go, and Ralph, not wanting to appear jealous or needy, agreed. About an hour later, Ralph had second thoughts. He collared the maître’d, paid him $100.00, and was given directions to Elvis’ room through the back stairwell.

When Ralph arrived at Elvis’ floor, he knocked. No answer. He knocked harder, started banging louder. No answer. Finally, he saw an electrical breaker box and began flipping the switches on and off. That got results. Bad results for Ralph. Suddenly the door burst open and two burly men grabbed him and wrestled him to the ground.

“I am just here to get my girlfriend,” Ralph shouted.

The men ignored him and punched him in the ribs. They then called hotel security. Security arrived, handcuffed him and told him he was under arrest for trespassing and disturbing the peace. Ralph again tried to explain, but was told to “shut up.” As he was being led to the elevator leading from and into Elvis’ suite, Presley suddenly burst across the room and yelled at Ralph, “I’m going to kill you, you son of a bitch.”

While the security guards stood by, Elvis beat the handcuffed Ralph for about five minutes. When Elvis was finally pulled off by his own bodyguards, Ralph slumped to the floor bleeding from the mouth, eyes, nose and ears. He was barely conscious. The Douglas County sheriff deputies arrived on the scene, spirited Ralph to jail, and denied him any medical attention. The next morning Gina secured his release and took him to a local hospital. His injuries, included a broken jaw, two ruptured ear drums, a crushed cheekbone, and cracked ribs. His whole face looked like a giant red cabbage. His medical bills exceeded $49,000.00—a significant sum in 1975. His damaged ears prevented him from ever again flying in a plane or driving over 4,000 feet in elevation.

We filed suit in Washoe County (Reno) Federal Court against not only Elvis, but also the Sahara Tahoe Hotel and the Douglas County Sheriff’s Office. Elvis hired the best, well-connected lawyers. My law partner and I were just looked upon as a couple of country bumpkins from Carson City, Nevada. But it really didn’t matter. We had an ace in the hole to prove that Elvis, his bodyguards and the deputies were lying under oath in their depositions.

Elvis’ deposition created a fanfare in Carson City. On the day of his scheduled deposition, the entire parking lot was surrounded by reporters—some from as far away as London. Elvis refused to leave his limo, and we settled on taking the deposition at his suite at the Sahara Tahoe. At his deposition, Elvis sat, bloated and pasty, arms on the conference table and head down. He never made eye contact with me and slurred his responses, generally with a “No sir” or “Yessir.” I marveled that his manager Tom Parker had managed to mold this pathetic blob of humanity into the superstar he had once been.

After the depositions of the witnesses on behalf of Elvis, we produced our trump card. Elvis had rented only half of the floor and the whole incident had been witnessed by the other guest on the floor: Bob Raypole. Bob gave his deposition and confirmed our client’s version of the facts, contradicting Elvis’ claim that Ralph had started the fight and they were just defending themselves from a crazy man who was going to kidnap Elvis for ransom. Bob also gave his opinion that Elvis was under the influence of cocaine at the time.

“How do you know what someone under the influence of cocaine acts like?” the lawyer sneered.

“I am a drug counselor and have been for fifteen years,” he calmly replied.

At that point, the deposition ended.

Less than two weeks before his scheduled trial in Reno, we learned of Elvis’ “death.” Perhaps no one was sorrier to see him pass on than I. With his death, the bulk of our lawsuit also died. An estimated $5 million was lost to our client through our inability to claim punitive damages—those damages awarded by juries when a person commits an intentional act.  A punitive damages claim allows a litigant to probe into a defendant’s financial affairs to measure what the proper amount of punishment (10-20% of net worth) should be. But, back then, if a defendant died, then he could no longer be punished.

Years later, this legal principle was changed when Rock Hudson’s estate was sued for punitive damages.  But, in 1977, we could not collect the big bucks, and settled for about $750,000.00.

It was only in recent times that I wondered whether there was any truth to the claim that Elvis faked his death. His supposed quest for privacy, along with avoiding the embarrassment and financial loss of a trial, would have proved a powerful incentive.

Author’s Note: The actual names of the litigant and witnesses have been changed.

(Ed. Note: Our readers are strongly advised to make note of our standard disclaimer at the bottom of our Directory on page four of this publication.)