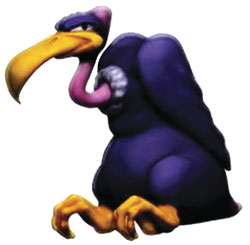 Vultures (zopilotes in Spanish) are among the most conspicuous birds in much of Mexico, including the Chapala region. Commonly misidentified as “eagles” these blackish scavengers, often in large flocks, can be seen almost anywhere, either circling lazily overhead, or feeding greedily on road kill or other carrion.

In our area, both turkey vultures and black vultures can be seen. Adult turkey vultures have reddish heads, hence their name. They are large birds, about 70 cm in length, with a wingspan of more than 1.6 metres. The turkey vulture (Cathartes aura) is easily distinguished in flight by its two-tone wings, the feathers nearer the body and head much darker than those behind. Its flying pattern is equally distinctive: it soars upwards on the breeze or in a thermal, out-stretched wings held above the horizontal, tilting first to one side, then the other, scarcely bothering to flap.

The black vulture (Coragyps atratus) is a shorter, stockier bird (no red on its head) that is nevertheless heavier than the turkey vulture and dominant to it when competing for a carcass. Black vultures have stubby tails and black wings with whitish blotches near their tips. They frequently resort to flapping their wings and appear unable to glide very far.

Sometimes seen feeding alongside vultures at carcasses is the longer-necked and larger-headed crested caracara (Polyborus plancus), a hawk that has distinctive markings. A bright red-orange face contrasts strikingly with a black crest and white neck and throat. Its name comes from its call, a harsh cackle, something like trak- trak-trak.

It doesn’t only eat carrion but also catches lizards, insects, and other small prey. According to at least one authority, this is the bird which featured in the ancient Codex Mendocino, and which eventually became the national symbol of Mexico, the so-called “eagle” perched on a cactus. Originally depicted in the codex without anything in its talons, the national symbol now incorporates a snake. One of the more descriptive common names for the crested caracara is the quebrantahuesos, literally the bone-masher.

Turkey vultures do not build nests but lay their eggs in sheltered spots, such as holes in trees, hollow logs, and caves. The young leave the nest at about two months of age. Juvenile turkey vultures probably require bone and other nonmeat parts of a carcass for full development.

While for a long time it was believed that turkey vultures had extraordinary eyesight and located their food by sight, it is now proven that they also have a highly developed sense of smell. The black vulture appears to hunt carcasses either by sight alone or by following turkey vultures to arrive at carcasses not easily visible. Since black vultures are dominant to turkey vultures, once they arrive, they may effectively chase off their far-smelling restaurant colleagues.

Turkey vultures must satisfy their appetites by eating small carcasses that they can finish off quickly. Perhaps as a result, unlike high flying black vultures, turkeys quarter an area systematically, often keeping fairly close to the ground, a tactic which enables them to smell even small carcasses. Whereas it is rare for  more than three or four turkey vultures to gather at any single carcass, black vultures can become very numerous around rich food sources like slaughterhouses and dumps. Both turkey and black vultures help keep the country clean.