GERONIMO
—and the Defense of the Apache Homeland 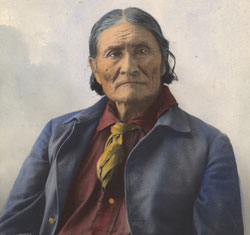 His very name, Geronimo, struck terror into the hearts of European invaders from the East and Mexican soldiers to the south. His enemies labeled him the worst Indian who ever lived. His story confirms the adage that violence breeds violence and that oftentimes one man’s terrorist is another man’s patriot.

On March 6, 1868, a force of 400 Mexican soldiers commanded by Colonel Jose Maria Carrasco attacked his camp while the men were in town trading, murdering his mother, his wife and his children, a criminal act that stirred an unrelenting hatred for Mexicans in the heart of Geronimo and launched a wave of violence that raged across northern Mexico and the southwestern US until 1886.

We have all seen his image, the grizzled Apache leader glaring fiercely from posters and T-shirts, clutching his battered rifle, surrounded by three of his equally determined followers. The caption usually reads, “Homeland Security Fighting Terrorism Since 1492.”

His name has become synonymous with grit, courage, and steadfastness in the face of overwhelming odds. The reputation is well deserved.  He was the quintessential patriot and guerrilla fighter.

The Apache leader we know as Geronimo was born in 1820, and named Goyaale, “One Who Yawns”. The name Geronimo may have been a mispronunciation of his name by Mexican soldiers. Apache raids against Mexican settlements began in the late 17th century, causing the governments of Chihuahua and Sonora to construct presidios.

Following years of brutal fighting in the arid mountains of the Southwest, the Mexican army and the Apaches arrived at a peace agreement at Casa Grande in 1873. During the celebration that followed, the Mexicans served the Apache mescal, later attacking them while they were in an inebriated state, killing 20 and capturing many more.

Atrocities became commonplace as all sides became brutalized by frontier warfare. In 1882, in retaliation for the Battle of Tres Castillos two years earlier when half of the Apaches were killed, Geronimo attacked the Mexican post at Galeana, killing the entire garrison and burning their commander Juan Mata Ortiz alive in a pit. On another occasion, Geronimo massacred a family near Silver City, New Mexico, leaving a girl hanging by a meat hook driven into her skull.

Apache battle tactics were unique and effective. A small group would lure a larger US or Mexican force into a frontal attack, during which other Apaches, carefully concealed among rocks and brush, would ambush the enemy from both sides.  Once the fighting was over, the Apaches would scatter in myriad directions, reconvening later at a pre-arranged location.

When Geronimo surrendered at Fort Bowie, Arizona, in 1886, he led a band of only 38 surviving men, women and children, 16 of them fighters. The group was loaded on a train and sent first to Fort Pickens, Florida near Pensacola, then to Mt. Vernon Barracks in Alabama, and finally to Fort Sill, Oklahoma.

Geronimo became a celebrity in his later years. He appeared at fairs and in Buffalo Bill’s Wild West Show, where he served as a pathetic caricature of his former self, attired in a feather headdress, catering to his audience’s uninformed preconceptions of all Native Americans. He even rode in Theodore Roosevelt’s inaugural parade, but, fearing a new wave of hostilities, the president denied him permission to return to his homeland. To the end of his days, Geronimo regretted his decision to surrender, instead, expressing his wish that he had fought to the last man.