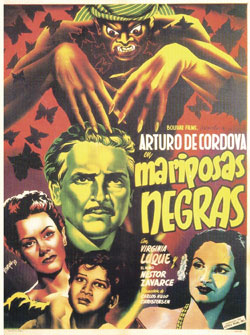 Mexican horror had its place as unique genre of film entertainment. Many classic films in the United States have fallen into public domain and now may be “freely exchanged.” Of the Mexican horror film genre, which is a fascinating cult area, none are in the public domain.

Thousands of Hollywood motion pictures are in the Public Domain because they were 1) released without Copyright Notices; 2) were never registered with the Library of Congress, had improper or late registrations; or 3) were not renewed after 28 years under the old requirements for films made before 1964.

Over the years, many foreign films had been improperly registered or renewed with the Library of Congress. Effective in 1996 materials which were protected in countries falling under the Bern convention were permitted to be protected under U.S. Copyright. This GATT treaty automatically placed all such protected materials under copyright within the limitation of the U.S. Copyright laws. The rightful owners had two years to register their protection and upon registration there was a one year grace period for owners of record to exploit their ownership before ceasing such exploitation.

Films which were re-claimed include most Mexican films, Swedish films of Ingmar Bergman, Italian films by Fellini and Rossellini, Japanese films by Kurosawa and German films like METROPOLIS extending back into the 1920’s. Library of Congress filings were also made on most British films of the 1930’s and 1940’s, even though they were public domain in Britain at the time, and the validity of these claims has not yet been challenged in court. The British films of Alfred Hitchcock are still sold as public domain by many vendors.

For Mexican films in the public domain, many used to be, but were reclaimed under GATT in late 90’s. In 1996, foreign countries were given the option to re-claim copyright on any of their films which had fallen into public domain in the USA. There was some guy here in Mexico who had no connection whatsoever with Mexican films, who filed to claim hundreds of them. That was a bold move. But it was not at all legal. The end result is that he got put in jail. We presume then that all the rights were given back to the studios that made the films, interesting enough given Mexico’s film production history, of which most were or are probably not around anymore.

Most PD films were made before 1964, and Hollywood did not use many Hispanic actors that early. The most famous may be Duncan Renaldo (Cisco Kid) who was actually born in Romania. Cesar Romero had Cuban parents and is generally considered Latin; he is in TV episodes of  PASSPORT TO DANGER and the PD feature Happy Go Lovely, but not many PD films.

Anthony Quinn isn’t recorded in any PD films, while Gilbert Roland can be found in films Beneath the 12 Mile Reef, Any Gun Can Play, Between God and the Devil while also noting Leo Carillo – “Pancho” in the Cisco Kid TV shows, and of course Ricardo Montalban, who was in no PD films other than FIESTA (1947), which is set in Mexico.