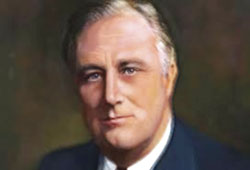 January 30, 2014 was the 132 anniversary of the birth of Franklin Delano Roosevelt (1882-1945). You’d think that the Democratic Party would note the birth of FDR, the Democratic president who led the nation out of the worst economic crisis in its history—the Great Depression, who led the nation out of the greatest and most catastrophic global war, World War II; the man who changed the relationship between ordinary citizens and their government; whose policies helped create American middle class, the engine of the U.S. economy; and who is credited with saving capitalism from itself.

“No president since the founders has done more to shape the character of American government,” notes historian Alan Brinkley in his biography of America’s thirty-second president. “No president since Lincoln served through darker or more difficult times. The agenda of postwar American liberalism was set out by FDR in 1944, when he called for an “economic bill of rights.”

Nicholas Lemann in his review of Ira Katznelson’s book, Fear Itself: The New Deal and the Origins of Our Time, reminds us that during Roosevelt’s first term the threat of fascism was real, that “alternate systems were on the verge of imposing themselves by force on many other countries.”

Rather than celebrate the contributions of FDR and the New Deal, the Democratic Party acts as an enabler, joining the Republican Party (which has been trying to kill the New Deal since the 1930s) in banishing this significant history, one highly relevant to the challenges the nation faces today.

Economics professor Richard D. Wolff believes that “Obama and most Democrats are so dependent on contributions and support from business and the rich that they dare not discuss, let alone implement, the kinds of policies Roosevelt employed the last time US capitalism crashed.”

And Americans, who have been described as having “terminal historical amnesia,” appear oblivious of this history. Too many Americans who came of age in the Reagan and post-Reagan years bought into the “government is the problem” and “trickle-down theory” propaganda, which has been proven to be just that—nothing more than right-wing, extremist conservative propaganda and ideology. Too many spineless corporatist Democrats frightened by what they refer to as “hard left” (whatever that means) have let the right get away with the re-writing of U.S. history. Since Americans appear to have stopped reading history beginning in the 1970s, the right has had plenty of help.

The New Deal was the response of the administration of Franklin Delano Roosevelt to the catastrophic Great Depression that revealed the serious flaws of a free-market ideology based on beliefs not empirical evidence. The New Deal did not engineer a full economic recovery during FDR’s first two terms: it had limited success in the short run because it erred on the side of caution, but the most basic economic analysis reveals that it worked.

It brought real relief to most Americans and stabilized a collapsed economy. Full economic recovery resulted from the public spending in World War II, which demonstrated the necessity of providing a fiscal stimulus adequate to the needs of the economy. The New Deal was not socialism. It was capitalism with safety nets and subsidies and is credited with saving capitalism and perhaps western civilization.

Its long-run institutions became the bedrock of our nation’s economic stability. The growth of the economy from the 1940s through the 1960s was widely shared. The Roosevelt Revolution created the greatest expansion of the middle class that the country had ever known and a modern government for a modern nation. 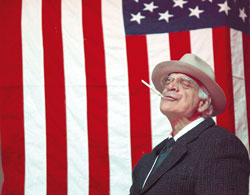