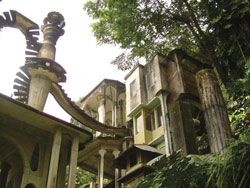 Some people think Edward James was certifiably insane because he once built outside Xilitla (in La Huasteca, in the northeastern state of Mexico, San Luis Potosi), some of the most bizarre concrete structures ever seen. Others think he was a genius who created his dream at “Las Pozas,” a paradise of nature, among tropical forests, waterfalls, caves, and hills. James transformed a jungle-covered hillside into an enchanted garden of his own design without the help of any architect.

He designed the place on rough paper sketches that the Mexican laborers converted into wooden molds. Then those molds were filled with concrete. There are many animal and vegetable forms: flamingos. Peacocks, crocodiles, flowers, fruits, bamboo trees, spiral staircases, columns, etc. James wanted to blend the tropical nature with his structures in perfect harmony.

Edward James was an eccentric millionaire born to English royalty (godson of, and maybe even the illegitimate son of Edward VII) in 1907. He inherited the Phelps Dodge copper fortune, and a 300-room family estate in Sussex, England, where Edward VII often went foxhunting. Disappointed when his first book of poems was not published, he left England in the late 20s for the U.S.

He lived in Los Angeles for ten years among a group of expatriate artists, including Gerald Heard and Aldous Huxley. There he was known for his outrageous behavior, his week-long parties, and strange personal habits, e.g., constantly washing his hands and carrying around enormous amounts of tissue paper, which he used to cover almost everything with which he came in contact. He married a pretty dancer, Tilly Losch (who later was to create a huge stir playing Jennifer Jones´ Mexican mother in the film Duel in the Sun) but when their relationship started to fall apart, James hired the famous choreographer, George Balanchine, to help Tilly create a full season of ballet. When the season was over and she and Balanchine left for New York, the marriage was over too.

James later came to Mexico and lived in Cuernavaca. There he met Plutarco Gastellum, who became his life long friend. Plutarco helped James find and build his paradise, and in 1994 James moved from Cuernavaca to establish his architectural kingdom outside the mountain village of Xilitla. His original idea was to create an orchid garden with the help of Plutarco, who knew a lot about orchids. James wanted to develop a natural reserve for tropical plants, as well as for animals from all over the world, and bought 80 acres of the most beautiful land in Mexico. Unfortunately, in 1962, a frost killed the orchids.

After that, James planned a different kind of garden, in which “nature and art would live together in mutually reinforcing harmony.” He invested five million dollars to build, over a period of twenty years, huge and peculiar structures. There are rooms with no doors, pillars that support nothing, staircases that lead nowhere, bedrooms without beds, and libraries without books. At every turn one encounters a bewildering surprise.

Another surprise was “El Castillo” (The Castle), the house where James sometimes lived. It was built by his partner, Plutarco, for his own family, under James’ supervision. It is a most unusual construction; located on the top of a hill, the six-room house has 18 ft. ceilings, walls made of honeycomb glass, gothic windows, and an eye-shaped swimming pool.

Both “El Castilo” and “Las Pozas” are now owned by Plutarco´s eldest son. “El Castillo” was once leased to an American couple, the Danzigers, who converted the property into a charming bed and breakfast. Danziger, who was a cinematographer, also managed to find financial backing for a documentary about the life and work of Edward James at “Las Pozas.” Dazinger´s film was shown on U.S. public television and cable, and written about in magazines such as The Smithsonian.

James never finished any of the 20 structures on the property. As Dazinger said to Jim Budd from Ecoturism Magazine, “Edward would get an idea, start on it, and go to something else. He was an aesthete, but not very good at finishing things.” Since James´s estate did not allow for funds to preserve “Las Pozas,” it has been deteriorating. The present owner can only afford to pay workers to keep the jungle from growing over the structures.

Walking through “Las Pozas” and “El Castillo,” I was thinking that James had been a modern-day Don Quixote, a weaver of dreams, and an idealist who had struggled mightily to turn a grandiose vision into reality; and while James must have had an ego as large as the planet Pluto, he gave hundreds of peasants employment, and fed many families over a period of twenty years. But for the visitor, there is a different bonus: an overwhelming aesthetic, as well as spiritual experience. “Las Pozas” is not easy to find, but like few other sights in a country filled with spectacular vistas and unusual places, it is well worth the effort.