Daylight Attack In The Plaza 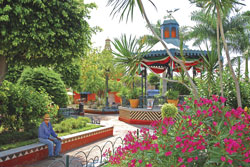 It was sudden, unexpected and yielded an adrenaline rush that lasted for hours.  One moment, I was sauntering into the Plaza, my taste buds anticipating the comfort of a bowl of tortilla soup, the next moment I was aware of having dropkicked a vicious pooch off my dog, amidst snarls and yelps, and the pitiful cries that accompany a dog fight. What I remember of the moment was that my friend spoke to her neighbor who was sitting in a restaurant.  Her dogs were tied to the chair beside her. Suddenly, one dog charged down the steps, dragging the chair, and flew into my dog’s face, fangs slashing.  I remember a man shouting “Dog fight!” and a crowd of interested canines and humans gathering.

Because my pup was crying and trembling, I dropped down to look for damage. Her right eye was oozing blood.  No other wounds were evident so I picked her up, and said to my friend that we needed to get to the vet quickly. (Just a  moment to express gratitude for living in a village where my vet was only a block away, where his skill, confidence and kindness awaited us.)  As I shakily left the plaza cradling my dog, the owner of the attack dog kindly volunteered to pay any vet expense, a small consolation at the time, but it was the very best she, or anyone could have done under the circumstances.

The vet quickly cleaned and examined the wound. A small red dot had appeared between and just above her eyes, oddly giving her the appearance of a wise Hindu. The other half of the bite had ripped the lower eye lid, in a superficial way, such that the only real medical concern was the possibility of infection. My dog did not seem traumatized, and appeared to have her vision intact. What a relief to know that the incident was minor, and the results good.

The next morning (as I write this) I am keenly attuned to feelings of not wanting to walk the dogs again. We humans have wonderfully complex, sometimes convoluted relationships with our canines, not to mention how we are frequently able to put the wellbeing of our pets above the needs of our fellow humans. Often the animals are surrogate children, and become the primary relationship for those who might otherwise see themselves as being alone and unloved. Given that dynamic, it is reasonable that we might overlook or simply deny their occasional antisocial behaviors, and allow them to behave poorly.

Could it be that dogs, like any other species, are companions in our journey through life? They are not mini-humans, even though they frequently outperform many humans by delivering unconditional love to the source of their food and shelter. If we honor and respect them as dogs, we can begin to accept that they need, want and expect to be treated as the species they are. Maybe they are here to serve, to protect and to be enjoyed by their owners and all others they come into contact with. When they cause stress, we need to look to the master of the animal to see why they choose to permit that behavior.

If a dog is or has been a hazard to others, then treat it as such. If its behavior is dangerous, or just obnoxious, get the help of an expert to assist in training. We live in community with our pets. Let’s keep it safe for everyone!