The Artistic Clay Of Tonala 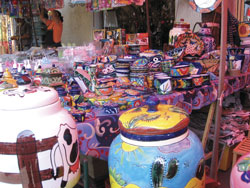 All over México it is possible to find artistic clay pieces, either utilitarian or decorative. Tonalá is probably, the most artistic center of the whole country, where beautiful pieces have been made for centuries.

The polished pottery produced in Tonalá today has its roots in pre-Hispanic cultures, like the Chupícuaro of Michoacán, 200 BC to 200 AD or the pieces found in the Tumbas de Tiro (shaft tombs) of the State of Jalisco, Colima and Nayarit, 200 to 400 AD. Another fabulous sample is the pottery of the Tarascan culture, also of Michoacán, from 1,300 to 1 500 AD. (The political boundaries of the states do not necessarily coincide with the boundaries of the different ancient cultures.)

Tonalá, a town only 14 kilometers from Guadalajara, produces both decorative and practical pottery, which has become famous for its quality.

The oldest and most traditional pottery and ceramic pieces from Tonalá are known as barro bruñido (polished clay) and barro de olor (aromatic clay). The first refers to the highly polished surface of the ceramic pieces, and the second suggests the aroma that this pottery gives to the liquids it may contain. They say that never a glass of water tasted better and fresher than the one which filled with water from a clay container made by the loving hands of an artist. The technical characteristics of polished ceramics and the tools needed to make them are practically the same today as they were centuries ago.

The Museo de América of Madrid has some of the oldest Tonalá pieces in the world, dating back to the seventeenth century. That same museum houses the extraordinary collection of the Countess of Oñate, with almost a thousand pieces. Most were made in Tonalá during the Colonial period. Their style is a perfect example of the merging of the two cultures, the Spanish and the Mexican. The collection has large dishes, jars, vases, bowls and other objects. It is possible to detect an Oriental influence, but their decoration of fruits, vegetables, flowers and animals, has a definitive personality.

The medicinal and aromatic peculiarities attributed to the raw materials used in the manufacture of the Tonalá’s ceramic and clay pieces made them very popular in the European courts of the time. A clear indication of this are the collections housed in several European museums, as well as the chronicles of the time. One of these chronicles tells how fragments of the pottery were eaten by the ladies of the court as sweets, not only to cure some illness but to perfume their breath!

After the Colonial period, and when winds of change swept throughout the Republic, changes were also introduced in the Tonalá ceramics. This can be seen in the pictorial modifications. To the traditional decorative plants, flower and animal motifs, landscapes were added, in a typical taste of the times. Also, the royal crests gave way to nationalistic trends, as can be seen in the change from a popular design of the Austrian eagle which disappeared and gave its place to the Mexican eagle, with cactus and serpent.

In future issues we’ll talk about the different kinds of modern pottery of Tonalá and about the influence of its artisans who have enriched a very beautiful ancient tradition.