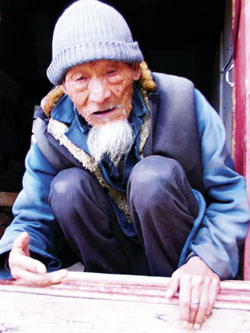 He was a small man, but his hands were large and strong. Two men could not pry his fingers open from his wooden mallet. He won the bet, and that night drank at the pub forfree. Perhaps he never would have become a carver if he hadn’t lost his legs. A mine had ripped them off like leaves froma tree in storm. Now his arms worked forboth arms and legs, and he became a wood carver. His fingers cherished the wood as they once held a woman’s breast, with care, with tenderness and compassion, as one holds a wounded bird hoping for it to fly. That was before the war in Italy and before the battle of Arno.

“We won, showed them, yes, show them we did.” Often, he talked to himself while carving.

Raising his arms, his hands explored the emptiness until he found the dangling rope he had tied to a roof beam. Holding on to it, he lifted what was left of him effortlessly and held himself aloft in front of the mirror he had nailed in the wall when he still had his legs.

He saw a tree stump in the shape of a man.

“Who could blame her forleaving me?” he asked.

Again he spoke aloud telling his story to unseen witnesses. He had tied the rope then, when he no longer wanted to live. Now he brushed the memory off as he whisked the shavings of wood fromhis apron. Slowly he lowered himself, a softsmile playing on his lips as he once more felt redeemed by the wood under his hand.

A commission arrived with the noon mail. The Italian bishop wished a carving of Christ on the cross. It was to be a gift for some obscure convent near Cuorgne in Northernn ltaly, by the Apeninos.

For many days the carver researched crucifixions conceived by artists of all times. Books with reproductions of rigid Byzantine images. Christ’s with the body of woman softness by Giotto. Murillo’s with agonizing eyes. The mystic ones of el Greco, and the beautiful Titian’s. Then, the symbolic Christ of Dali and the mysterious yellow one by Gauguin.

“All tormented Christ, to the image of the artist ...as God created men,” reflected the carver. He carved with love. Slowly the beautiful figure of a nude man took form. With bent head, eyes closed and out stretched arms, it suggested a pagan God flying over his creation. But the sculpture was not complete. A cross had to be made.

“As God created man to his own resemblance, thus the artist creates God.”

Now, the carver worked at night. The strokes of his tools against the wood became violent and cruel. In a frenzy, he tormented his own creation with ugly strokes from a blunted chisel. He tore at the face so lovingly molded and broke the legs to a grotesque position. He worked in the dark, the carver, not wanting to see what he was doing.

“Perhaps he also worked at night.” The carver said, but only he knew what he meant.

Far away, near Da Belmonte, the convent bells sang with the echo of the close mountain. Nuns, anonymous in their rough brown habits, entered the chapel bringing garlands of flowers preparing for the ceremonial celebration. The gifted image of Christ, a brutally tortured man, with a stained cloth tied to his hips, hung from a black cross in the center altar. Sister Ursula, lightly and gently cleansed the tormented effigy with a white cloth. She had clear eyes, limpid, blue like the far translucent mountain sky.

In the refectory, the bishop waited, slowly drinking a mug of chocolate while writing his sermon.

Suddenly, Sister Ursula’s terrified scream tore through the convent silence. She staggered into the refectory holding the image’s stained cloth.