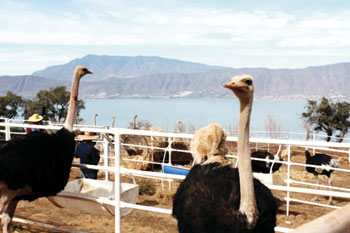 I first met Sandra Luz in her market stall in Ajijic’s Friday Artisans’ Market surrounded by a seemingly eclectic combination of brightly colored feathers, candles and planters made of something too perfectly shaped to be gourds, and vials of something that looked like they came straight from a cosmetics counter.

She speaks even less English than I do Spanish. No surprise, then, that it takes conversation strung across a couple of market days before I fully understand that the brightly colored feathers are hand-dyed ostrich plumes,  that the curiously shaped candles and planters are emptied ostrich eggs sliced neatly in half, and that the vials contain a healing skin serum made of essential oils rendered from – you guessed it – ostriches… las avestruces.

Then the story gets even more interesting.  It turns out that Sandra Luz and her husband Francisco raise the ostriches just outside the village of San Cristóbal Zapotitlán on the opposite side of Lake Chapala, and I soon find myself invited to visit the “Rancho de las Avestruces”.  I confess that for a moment an improbable image of sombreroed vaqueros herding a legion of Big Birds flashes through my head.

On the appointed day I stop in nearby San Juan Cosalá to pick up Martín, another Friday Artisan Market merchant who’s fluent in both English and Spanish, and soon we round the end of the lake and turn off the highway at a spot I’ve passed before without note.  In minutes the village of San Cristobal Zapotitlán appears, hugging the coastline unseen from the highway.

The town is neatly laid out around a plaza at one end of which omnipresent street vendors sell clothing, CD’s, and DVD’s.  At the opposite end a mother and child browse a florist’s stand awash in Mexico’s native poinsettias, las flores de Nochebuena… the Christmas Eve flower.

Next to a canopy that covers an open-air foosball parlor made up of vintage tables, a man painstakingly weaves a fishing net from a spool of nylon line as deftly as if he was making a rug.

Another man sitting next to him watches, but hardly a word is spoken and I get the sense that they have long ago talked each other out during uncounted hours spent here together.

The worn and weathered mechanical gaming tables are a nostalgic anachronism in an era of video games, and they remind me of my mis-spent college days.

Towering above this entire scene is the campanario –the bell tower of the parish church – tiled in a distinctive checked pattern of blue and white.

We stop by Sandra Luz and Francisco’s modest home, where she shows us the workshop corner in which she crafts her ostrich feather art and ostrich egg arrangements.

In an adjacent room, ostrich eggs the size of footballs sit in an incubator.  They weigh a hefty kilo or so. Francisco tells us that one of them is equal to 18 chicken eggs and makes an omelet which can feed an entire family.  He holds one of the eggs up to a light so bright that it shines through the shell to reveal if it’s to become an ostrich or an omelet.

I’m still peering into the incubator when he suddenly appears holding an ostrich chick only three days old and already as big as a small chicken.  My curiosity whetted, I’m ready to see ostriches grazing on the open range… or whatever it is that ostriches do.

Back on the main highway we travel only a short distance before turning toward the mountain on a dirt road that even in this dry season is so rutted that my SUV creeps along behind their pickup truck.  Gates are unlocked and relocked as we pass through, ascending almost continuously for 20 minutes before the big birds suddenly appear, corralled in fenced pens that cover a space the size of a basketball court.

We step out of the car into a bracing breeze, and Francisco tells us that we are now 1,700 meters above the mile-high lake. There are more than a dozen of the birds, their long necks already craning in our direction as we approach.

One particularly large specimen quickly sets us straight on who rules the roost, dropping to his knees and swaying back and forth as he spreads his wings in a macho display.  The birds will peck harmlessly at a stranger who ventures too close to the fence, but Francisco tells us that it’s the kick from their 25-pound-drumstick legs that can easily injure an inattentive human. He also tells us that the rancho is self-sufficient; the family grows the corn and beans that feed the winged herd.

I slip around to the back side of the corral for a better photo and that’s when I see behind the feathered herd the lake beautifully spread out below from its western end to its vanishing point on the eastern horizon.

Ajijic and the other villages across the lake appear as specs along the shoreline, villas climbing the mountainside behind them until the steep grade gives way to the wild.

Here at the rancho the mating season is just beginning.  Each female may lay up to 40 eggs in a year, burying them in the earth.  If December days are cool at this altitude, December nights can be bone-chilling; the eggs are exhumed and placed in an incubator.  The family breeds the ostriches for sale to other would-be ostrich ranchers and it also sells ostrich meat, which Francisco tells me is very lean.  Each bird can yield up to 35 kilos of meat… none of it white meat… and grow to full height within a year.

Sandra Luz has already lit a wood fire on a brick grill.  We dip glasses of Jamaica-flavored beverage out of a barrel-sized jar as she lays out frijoles, white corn tortillas, and a bowl of salsa.  In a few moments the aroma of meat grilling on a comal drifts over us and we’re soon eagerly dropping the seared beef onto tortillas and scooping up frijoles in the open ends.

As the visit draws to a close and we head back down the mountain, I reflect on the unconditional hospitality that has again marked my Mexican experience.  The mountainside picnic alone was worth the trip, but it also crosses my mind that upon my return I need to try my first ostrich steak.

Ostrich art, though, is only part of the story of the artisans’ cooperative of San Cristobal.  Follow me on my next post to an artisan workshop back in the village where local women craft elaborate art from nothing but simple corn husks and palm fronds. 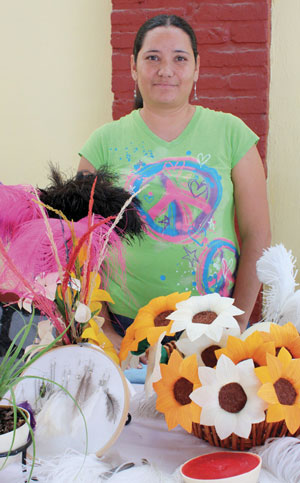 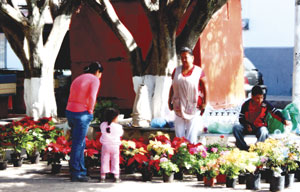 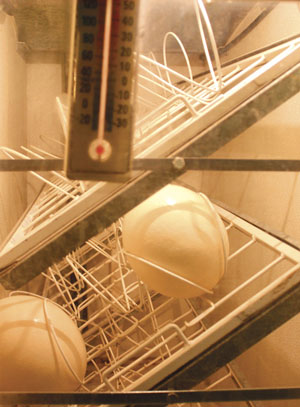 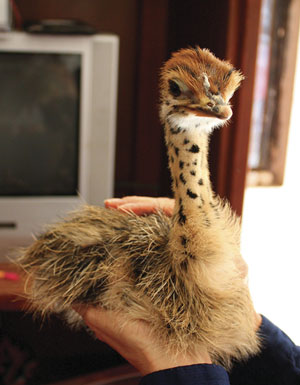 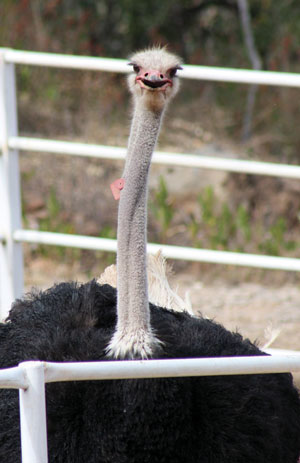