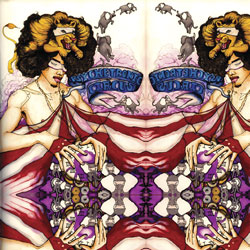 We drove around the block three times to get a better look at the house when we first saw it nine years ago. When we told some friends about it, they said, “Oh, yes, the Arabian Circus house.” Naturally we wondered. Every time we visited Ajijic we drove by the structure and we wondered again. As amazing as it still seems to us now, we live there.

The house is located in Upper La Floresta and it’s a fun house. What do I mean? Well, one day, not long ago, as I was going through the gate on the north courtyard—the one with the fountain that is surrounded by battlements of blue, white, red, black and multi-flowered ceramic tile—I was confronted by a van load of Canadians taking photos of the house. As I walked out, they asked: “Do you live there?”

“Uh, yeah, I do,” I said, remembering that I did. The curiosity this place excites is a phenomenon we’ve become used to but it took a while. Cars stop, people stare. Often they back up to take another look. This usually happens when the snowbirds come to Lakeside. At first our new friends would introduce us with a little addendum to our name: “And do you know where they live?” We showed the house to some Mexican friends who told us how lucky we were to be able to live in a palace. “It’s a happy house,” the lady said.

A few of the longtime residents still remember Walter Thornton, the man who built the house, a handsome world-traveler who owned an international modeling agency. We are relatively new here, so this is one of the classic cases when we are confronted by a man we actually know very little about. But we know him by what he has done and what he has been.

Some time around 1952, the lonesome worshiper at the altar of feminine beauty sojourned in Guadalajara, beset by the pains of a divorce. The 18-year-old beauty he encountered one torpid day dazzled him as no other woman had. Five children later he moved his family out of the harum-scarum of a growing metropolis and into the placid quiet of La Floresta. A sixth child, a daughter, was born here in 1969.

When the circus came to town to be part of the Chili Cook-off, Walter Thornton delighted his children and friends by bringing the elephants and performers to his wonderful, colorful house for a party. It must have been a sight here in the huge rear courtyard that is covered with big red and yellow concrete octagons. The backdrop for the performance was two towering, castle-like structures that were actually the bodega and the casita. The huge red and yellow aljibe shaped like a Moorish dome and the fountain surrounded by water spouting, green concrete frogs added to the show. It was Arabian Nights come to Ajijic.

What inspired the house? We think, perhaps, it was the Alhambra. But then the story goes that a friend, who still lives in Ajijic, asked Walter about the house one day. The imaginative creator of the house said he hated to paint. He reasoned that if he tiled every surface, there would be very little to paint. Consequently virtually every square inch of the big house, inside and outside (including the mirador) is covered with a myriad of colorful tiles.

This is not a museum. It is a home. We live here. This house was always meant to be a home and lived in. Thornton’s widow says that it is a living monument to a man who loved and was loved. She will not sell it. We therefore rent it because, because... Mexico, we have discovered along with millions of others, is a land where color and beauty go hand in hand to create the mystic excitement that infuses daily life here.