What does Mexico’s president know that President Obama doesn’t?

Commentary by Marita Noon
— Executive Director, Energy Makes America Great
This email address is being protected from spambots. You need JavaScript enabled to view it.
Edited by Frank Callom 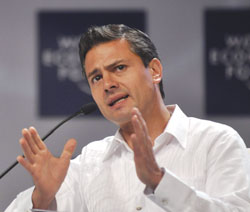 It is not often that Americans look south of the border for solutions, but Mexico’s President Enrique Peña Nieto seems to have figured out a few things in his first year of power that has, in six years, eluded Obama.

Late last month, Peña Nieto spoke at the World Economic Forum in Davos, Switzerland. There, he highlighted his first-year achievements: “a legislative consensus with the two major opposition parties on the transformations and structural reforms that the country needed,” reports Mexico City’s The News. He pointed out that this has been achieved “in a climate of plurality and diversity.”

The reforms that passed on December 12, 2013, allow profit- and production-sharing contracts, and licenses. The reforms also put an end to government monopolies in the operation of oil-and-gas fields, while maintaining the Mexican government’s ownership of the country’s resources. “The current government’s ability to build coalitions puts Mexico on the verge of its biggest economic victory since the North American Free Trade Agreement,” states Arturo Sarukhan, who has served in Mexico’s Foreign Affairs Ministry.

One third of Mexico’s federal budget comes from oil wealth that has declined 25 percent since its peak just a decade ago. Reform has the potential to transform Mexico’s economy by inviting foreign investment, which Peña Nieto successfully argued is needed to “allow Mexico to capitalize on its shale oil-and-gas deposits.” Because almost all of the profits of Mexico’s state-owned oil company, Pemex, have gone back into the national coffers—and not into research and development—Mexico lacks the technical expertise to exploit its unconventional resources and deep-water deposits.

The critical phase of drafting the laws to implement December’s energy reform bill began February 1. These laws will spell out the terms and conditions for foreign international oil companies to explore and develop Mexico’s deep-water and shale resources. OilPrice.com reports: “Mexican Congress has 12 months to develop energy-related environmental regulations and to establish the National Center of Natural Gas Control and the National Energy Control Center.”

Peña Nieto’s energy reforms face some opposition, but he understands how important developing Mexico’s energy resources are to economic growth—something that seems lost to Obama. Another thing that President Obama could have learned from Peña Nieto is that lower energy prices are the key drivers of economic growth.

Peña Nieto understands the need to build pipelines to bring the needed supplies into the country. Meanwhile, in America, we’ve been waiting for five years for the Obama administration to approve the Keystone pipeline. Peña Nieto understands that lower energy costs will help his country be competitive. Obama’s policies have increased electricity prices—both residential and industrial—in the U.S.

Having just spent the past week in Mexico, I am keenly aware of the need for Mexico to lift its standard of living and increase economic growth, which Peña Nieto understands energy can provide. As America’s economic numbers slip, this, too, is a lesson Obama needs to learn.

(Ed. Note: The author of Energy Freedom, Marita Noon serves as the executive director for Energy Makes America Great Inc. and the companion educational organization, the Citizens’ Alliance for Responsible Energy (CARE). Together they work to educate the public and influence policy makers regarding energy, its role in freedom, and the American way of life. Combining energy, news, politics, and, the environment through public events, speaking engagements, and media, the organizations’ combined efforts serve as America’s voice for energy.)