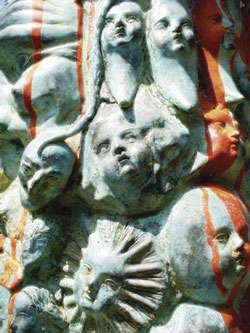 In 1964 I was living in San Francisco, in a boarding house on California Street, two blocks up from Chinatown, where I paid ninety dollars a month for room and board. I spent most evenings at the famous City Lights bookstore, where I pored over books and looked for beautiful young women who liked poetry and Buddhism and coffee shops.

Late one winter afternoon I heard that Maxwell Maltz would be delivering a lecture that very evening. I had read his recent book Psycho-Cybernetics, which popularized “success conditioning,” a method of self-improvement based on “reprogramming” the subconscious, changing the “internalized” words and sentences. The sponsors had scheduled the lecture in a building in a fading neighborhood whose streets were filled with homeless people.

As I entered the lobby with its worn tiles and dim lighting, I saw a man, apparently very drunk, lying on the floor in a pool of his own urine. His arm stuck out at a strange angle, as though broken, and he was obviously in pain. Part of me wanted to help him, but another part of me wanted to appear cool and groovy to the comely young women who were there to attend the lecture on personal growth. Along with the rest, I walked around him and began to climb the stairs to the lecture room above.

But at the top I turned and looked back. I watched a woman, of middle age, bejeweled and wearing a luxurious fur coat, enter the lobby, obviously there to attend the lecture. Without hesitation, she walked right over to the moaning man, knelt down beside him, touched him, tried to comfort him, and determined that his arm was, indeed, broken. I could hear him beg her not to call the police. She promised she would not. Then she asked someone to step outside to the pay phone to call a social agency she was somehow already familiar with.

The rest of us stood on the stair watching, almost transfixed, and knowing that we had passed him by.

Given a choice between getting a good seat to learn more about “personal growth” or helping a suffering human being, that wealthy woman in her jewels and furs—whom some had mocked as she entered—was the only one among us who “passed the test.”

That incident affected me a lot. A couple of years later when tens of thousands of Hippies invaded the lovely old city, stripping the city parks of flowers to pass out to tourists on the cable cars, and “borrowing” books from my beloved City Lights bookstore, and shouting crude curses to the young soldiers who were shortly to be serving their country in Vietnam, “called to duty” whether that war was legitimate or not—I remembered that woman who was so beautifully dressed in a city that had until recently prided itself on elegance and who was herself “called to duty” that cool January night when she walked in and saw a man who was crying, lying in his own urine, his arm broken—a man whom the rest of us had passed by.

I paid little attention to the lecture. Because of that woman I was thinking about my life. She never got to hear about Psycho-Cybernetics at all because she waited below with that suffering man until help arrived.

I thought of her today while I was looking at a little card I bought years ago from the Tools for Change catalog and which I have kept on a shelf of treasured things. It says:

“Always hold firmly to the thought that each one of us can do something to bring some portion of misery to an end.”