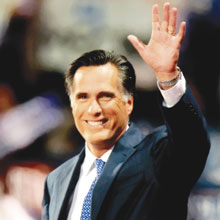 “I will not surrender America’s role in the world,” stated Mitt Romney in a speech at The Citadel in Charleston, South Carolina. And he continued, “If you don’t want America to be the strongest nation on Earth, I am not your president. You have that president today.”

The challenges facing the United States are formidable. Historically, each time the country has faced challenges like these, we have come through the gauntlet stronger and more united than ever before. Mitt Romney stands out as the better candidate in this year’s Presidential election; and he can beat Barack Obama in his bid for reelection and get the country back on track. Starting with Romney’s experience as CEO of his company, Bain Capital, and his time as Governor of Massachusetts, his economic leadership far surpasses anything Barack Obama and his team has shown or can offer.

And now, Obama cannot deal with the “Great Recession!” Nor is he able to solve such critical “issues” as the nation’s unemployment problem or its mounting debt. Romney is concerned about these problems, and he has the experience and ability to transform these negatives into positives. Barack Obama has not provided that kind of focused leadership since he took office. Mitt Romney has ample experience making executive decisions. Throughout his adult life, starting with his career as CEO of Bain Capital and, later, while Governor of Massachusetts, Romney had to make decisions affecting people’s jobs, lives and futures. Obama is a poor executive, but a great legislator. Let’s send him back to Congress where he belongs!

Mitt Romney can turn the country around economically, recreating jobs, profitability and economic growth and opportunity. When he took over as CEO of the Salt Lake City Olympics, the organization was in chaos, in debt and scandal- ridden. Romney turned it around. He unified diverse coalitions with their competing interests, and the games became a financial and diplomatic success.

Obama is big on symbolism but short on substance. His stimulus package may have saved or created a number of public-sector jobs, but a positive impact on the private sector has been nil. Mitt Romney clearly understands how jobs are created and how government policies affect economic growth; Barack Obama has shown that he does not.

Barack Obama is weak on national defense issues. (That, too, is an understatement!) For Example, the heads of state of China, Russia and Iran do not take him seriously. (Does anybody…?) His conciliatory attitude vis á vis these leaders is not only “somewhat admirable,” but it also works against him. Obama has been unable to curb the special interests in Washington, but Mitt Romney will... Romney will not be beholden to the special interest groups. According to Romney, “If military might is the core of hard power, America is in a league of its own. Even so, there are those who like to overstate the extent of our military advantage, believing as they do that our military investment is excessive and disproportionate to our needs.”

Romney will raise the United States’ defense budget from 3.8 to 4.0 percent of our GDP, adding $30 billion to defense. “It is time for our allies to increase their investment in national and global security in order to assume their fair share of the load and strengthen our combined capabilities.” The former Governor from Massachusetts will increase the United States’ strength and credibility and let U.S. “popularity” take care of itself. We must take action to protect ourselves from the grand spectrum of threats that confront us. And Mitt Romney will insure a renewal of defensive power necessary to protect the cause of freedom in the twenty first century.

Briefly, Mitt Romney is the man to vote for in November if you want a strong and vibrant economy. Obama has moved the economy south for the last nearly four years; but Mitt Romney, America’s next President, will transform our country into a prosperous nation once again; a nation and an economy where the phrase “I have a great job” will not necessarily mean you are flipping hamburgers for overtime pay at some greasy spoon or washing cars in a church parking lot on weekends. You will have a salary that affords you a decent and comfortable life, doing that which you were trained for or that which you wish to do, with enough money to comfortably pay your mortgage, pay off your auto loan and educate your children. This is the “Promise of America” and it is exactly this that Mitt Romney promises.

See you at the polls!