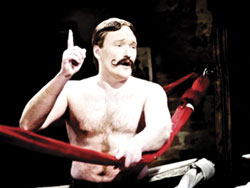 You usually saw him wandering the pubs on Clancey Street, Dublin. He was a big man with a square jaw and for the price of a beer he would chinwag all his professional fights. If the bartender saw him coming he’d ring a small bell and all the regulars would roar and the big guy would bob and weave, a big grin on his marked face, all the time people cheering as he shadow boxed down the length of the bar. No one knew his name, most called him 26-14 and 3 for his record as a professional fighter.

Some nights he fought every named heavyweight of the Twentieth Century, including Mohammed Ali, Joe Louis, Jack Dempsey and even Rocky Balboa. But his fight stories were always exciting and entertaining. The ending to the fight might change, but that was the lure of a 26-14 and 3 story.

Then, if on cue, a regular bought him a beer and he’d begin another tale of the sweet science.

“Yea, me most poetic fight was against an American black man named Tugboat Willie. He was a muscle guy who worked on the docks in Jersey and when God was handing out bodies, Tugboat was first in line. He had stomach muscles so ribbed you could do your wash on them and arm muscles that looked like loaves of bread… So, after the third round my manager said Tugboat was too strong for me. So I said to my manager, Jerry, what am I gunna do to win the fight?

“My manager says he’d watch Tugboat and get back to me by round 5. I said, don’t make it too long before you get back to me or I might lose the fight. I ask Jerry at the end of the fifth round what the plan is to outsmart him and he said he’s still working on it. We’re only going to 10! I shouted back. So Jerry said I should start talking to him in the clinches. What do you want from me, poetry? That doesn’t seem like a good plan. Do you have plan B? He said if I didn’t like his suggestions go back to plan A. I said what’s plan A and he doesn’t answer because the bell rings and I’m back out there trying to stay away from a bone crusher right.”

26-14 and 3 paused to take another drink of beer and all the regulars crowded in.

“So, I got to thinking, maybe I should start talking to him, recite some poetry. So the next time we get in a clinch I start with ‘Twinkle, twinkle little star, how I wonder what you are?’ The next clinch I say, ‘Georgy porgy, pudding and pie, kissed all the girls and made them cry.’ End of round six I staggered back to my corner, ready to give up the ghost, and Jerry didn’t say a word. I guess he didn’t hear my poetry. For the seventh round, the first time we get in a clinch, Tugboat starts reciting poetry back at me. It sounded Oriental. He whispered in my ear, ‘And how clear in the water, the nearness of the moon. I leave my message with the moon. And turn to my bed, hoping for dreams.’

“The tenth round starts and we are clinching and Tugboat is reciting more poetry. So we’re banging away and this time I fake like I want to clinch. He leans forward to embrace me and starts in with, ‘Why should I frighten sea-gulls when whispers of night clouds float on my…’ That’s when I tag him with a good left uppercut. He staggers back and I hit him again and drive him into the corner. I’m pounding away and to my surprise the referee jumps in and stops the fight. Jerry and my corner men rush in and grab me and Jerry says how did I do it and I said from somewhere, ‘The poems of greater fighters are my bones.’ That’s when he looks at me all queer like and I said, maybe I should be a fight manager.”

When 26-14 and 3’s story was over the regulars all cheered and someone mentioned that the last time he told that fight story it ended in the 8th round and the fighter was Mexican and quoting Cervantes. 26-14 and 3 just shook off the comment, saying he might be wrong sometimes; fighting does that to a man.