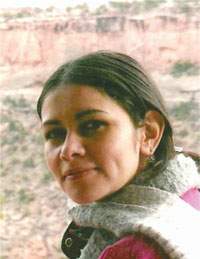 I like public transportation. I would like to gather together in one large room all of the people I have met, particularly on buses, with whom I have enjoyed, sometimes for several hours, a relationship that was pleasurable, that held without doubt a kind of meaning, that was complete in itself .

Some years ago in Denver, I was waiting at a bus stop on Colorado Boulevard, headed toward a lunch promise in Cherry Creek, when a young woman, attractive in her own way (which is always the best way), sat down on the iron seat beside me. She had silver hoops on her ears, and a modest silver necklace arranged itself against her breasts, which themselves were pleasantly imaginable beneath a blue denim shirt embroidered with flowers. Wow, I thought. I also still remember the almost iridescent Blue Morpho butterfly tattooed on the outside of her charming left ankle.

As it turned out she was headed south to her home. Although maybe thirty years old, she still lived with her father and mother in Gallup, New Mexico. We were not even waiting for the same bus. But as I quickly discovered (because she saw the book of Chinese love poems in my hand), she, like myself, loved and wrote (and even had a few published) poems. And so for ten minutes we swapped our short poems with each other. When her bus arrived I was almost ready to follow her onto it, thinking to hell with that lunch date in Cherry Creek, and to hell with everything else about my life.

That night, still thinking about her, I wrote something like this:

Ten minutes at a Bus Stop on Colorado Boulevard

A giant piece of butterfly had broken off inside her and I liked her for that. I was tired of living in the city. And I was generally tired of the angels of the New Age and their neurotic wings flapping to the point of almost being visible. And I was tired of the dissipation I was feeling, the dissipation I feel when I do what I do not want to be doing or say what I do not want to be saying…when I sort of feed Me too long to hungry people.

Around her the air felt suddenly fresh, and I breathed it deeply into me—like those breaths we sometimes discover that move us toward re-connection, toward being more intensely alive. And between the words she spoke was the same no-sound I hear when hiking at high altitudes, the same no-sound rocks make when I feel faint, the same no-sound sweat makes as it muses out of the pores, the same sweet no-sound I hear when others think I have lost attention, when others think I suffer a shortage of acceptable concentration in this concatenation of nerves that in another might have developed into a tentacled and somewhat respected reason, a state of mind, one might say, that at least bordered on being admitted to the union.

But here was union. Was it any wonder that I fell in love? And even though in letting her go I let her go for good, and even though the illimitable desire for connection rose up in me, there was union in that short space of which all our wisdom and our history has no knowledge.

The more I thought about that woman headed to Gallup, whom I realized later was probably at least part Navajo, or Zuni, the more I realized that I could, when I become very still and very open, fall in love with almost everyone, that I could be led by instinct to establish some immediate connection, to visit some common invisible garden in which we could share, if only for a few minutes, the most important aspects of our lives.

It took me months to come to that conclusion. But before that conclusion what actually happened was this. I was distracted all through that lunch in Cherry Creek, which was with a respectable young woman, whom I had met in The Tattered Cover Bookstore, who loved her weekend hikes with me in the mountains immediately west of Denver. That following Friday, I cancelled our climb of Mount Bierstadt. Instead, I followed a ridiculous romantic whim (something I remained capable of until only a few days ago), and I drove to Gallup.

There I spent two days riding city buses, seeing Indians everywhere I looked, but all I found was a woman working at Burger King whose face suggested she might have been a reasonably close relative. I leaned over the counter to study her ankles. Nothing. I asked her whether she wrote poetry. Irritated, she looked up from the cash register and demanded, “Is that for here or to go?”