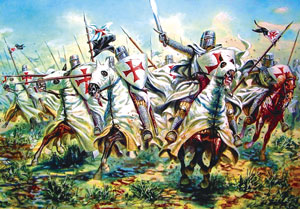 If one reads Middle Eastern and European Medieval history, it is easy to fall into the trap of oversimplifying present events with an overlay of the past. But shortly after the events of September 11, 2001 the President of the United States himself lamentably introduced the term Crusade to define his War against Terrorism. He then launched an invasion of Iraq on the trumped up pretext of Saddam’s possession of weapons of mass destruction, and when the sham was exposed shifted his cant to a different refrain: bringing Democracy (our secular religion) to a benighted Muslim culture.

The great Crusades of a millennium ago were driven by greed and conquest. The same could be said of the earlier expansion of Islam. Temporal princes cloaked their machinations in religious fervor in order to acquire greater power and wealth for themselves. Enforced religious orthodoxy, Islam’s Sharia and the Roman church’s Inquisition, imposed conformity upon those who lived under the aegis of religiously legitimized princes.

Perhaps, the analogy is overdrawn. But on the other hand the methods are thoroughly time-tested. Witness the recent history of the Third Reich and the demonization of the Jews.  Could it be that in 1933 the Germans suddenly found themselves in a Germany that they never suspected would be possible until it was too late?  Should the rise of the Third Reich be attributed to the germanness of the people? The flaw is a proven potential in all humanity.

Are all Muslims bad? Are all Christians good? There are Evangelists and Imams, and politicians on both sides preaching Jihad and Crusade, hatred and contempt! And good people are blinded or at least silenced by it.

Have our actions mobilized a World or even a part of the World against us? Aside from the economic motivations of Japan’s Greater East AsianCo-Prosperity Sphere, did the Japanese expect to be welcomed and not vilified when they invaded a benighted China, and the Southeast Asian colonial empires of the British, French, Dutch, . . . and the US (Philippines)?  Did they see their role as a force for liberation and enlightenment? Contrary to the World view, the Japanese to this day see themselves in that war with a far more noble purpose than that which we attribute to them. Analogies can be carried too far, but events playing out in the streets of Baghdad, or for that matter in the mountains of Afghanistan and Pakistan certainly don’t smack of local gratitude for the gifts of Liberty, Democracy and God forbid, Christianity!

The aftermath of 9/11, the attack on Afghanistan and the orchestrated buildup to invasion of Iraq have served to obfuscate the growing concentration of arbitrary power in the hands of our Federal Government: a setback to many hard won liberties.

Two watershed events have occurred in the lifetimes of those of us who were born in the Nineteen-Thirties.

First the human population of this planet has tripled to nearly seven billion, and doubled in the United States to about 380 million.  Once smog was a phenomenon peculiar to Los Angeles, now it’s a planetary problem. We are now plundering the Earth’s resources at a rate undreamed of a few years ago. We are at war over energy supplies. We may find new energy alternatives, but what is the substitute for uncontaminated water? We are depleting our fisheries and our forests far more rapidly that they can replenish themselves. We introduce chemicals into our soils and oceans, into our domesticated animals, so that we can continue to produce food and fiber at a rate consistent with expanding human demand. Those same chemicals may be altering our bodies in ways that we can only guess. We in the developed world, and even around the planet where poverty dominates, produce more, consume more, contaminate more and encroach and lay barren more productive land every day. We argue about it. We accuse others. We excuse ourselves. In any case we can’t seem to stop ourselves!

In many parts of the United States fish and game control authorities make wildlife counts in wilderness areas. Annual hunting and fishing licenses are issued for deer and other animals with a view to thinning the herds to survival levels. In other words, kill some or too many animals would survive, exhaust their food sources and then all would die!

Will the human race ravage our environment to the point of threatened extinction, and then thin the herd? It has happened in historical times on a smaller, local scale. Depending on the pretexts we often refer to it as genocide. When we slammed the door on the Kyoto Treaty on the Environment, many observers of our actions must have given a thought to who would be the thinnees and who would be the thinners.

Or will we simply consume ourselves into extinction, like other animals have through the millennia. Where then our concepts of God, Allah and Yahweh?

The second event began with the Age of Weapons of Mass Destruction. The threats to our existence in modern times have altered the articulation of power in the government of the United States. Congress nominally still retains the power to declare war. But the potential pace of events in modern war is such that there is no time for debate. Retaliation during the yearsof mutually assured destruction made it imperative that response be instantaneous or the threat of retaliation would be empty.

Since World War II we have fought two major undeclared wars, Korea and Vietnam, we have invaded Grenada, Panama and Iraq (twice) and intervened by force in countless other places. With events leading where they seem, and the United States isolating itself more and more from the rest of the world, it may be impossible to retain our valued civil liberties and still survive. But if we don’t somehow retain them, do we deserve to survive?

Germany’s inter-war Weimar Republic had civil liberties. The attenuation and corruption of those rights morphed into the Third Reich. None of the things occurring under the aegis of the War on Terror by themselves seem too onerous. Secret trials or denial of habeas corpus for aliens, or more explicitly Muslims accused of terrorist acts inside and outside of this country, don’t seem unreasonable.

Monitoring e-mail, telephone conversations, bank and commercial transactions, all without warrants may have prevented a reprise of 9/11. None of the private activities of most law-abiding citizens should excite government concern. If the chiefs of Hitler’s Gestapo could see us now, would they be laughing?

Why shouldn’t we have a national Department of Homeland Security?  Germany had one. It was called the Reichsicherheitshauptamt- Main Office for National Security. It was headed by Reinhard Hedrich, and later by Ernst Kaltenbrünner. The latter was hanged at Nuremberg. Both of them reported to Heinrich Himmler.

Is there a reasonable equilibrium for what we exchange of our civil liberties for a sense of security? Should we err to the side of the liberties and accept greater risks? Should we err to the side of security and believe in the social contract; that those to whom we entrust our freedoms will in fact never abuse the power we have given them? If they were to abuse that power, are we capable of taking it back from them? In the 1940’s without the intervention of the United States, is it likely that the Third Reich and Japan’s Greater East Asia Co-Prosperity Sphere would have been brought down?

If we fail ourselves, who will come to our rescue?

Or have the times changed so much, has so much power been concentrated in the United States and entrusted to the hands of our leaders, that the United States is destined become the tyrant of the planet, the allocator of its resources and the thinner of its herds?