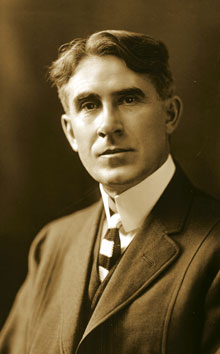 A little over one-hundred years ago a young baseball-player-turned-dentist borrowed $600 from his fiancée to self-publish his first novel.

That was in 1903. A few years later that author, Pearl Gray—now writing under the name Zane Grey—was earning $100,000 a year with his best-seller Western novels.

Born in Zanesville, Ohio, in 1872, Pearl Gray was the son of an Irish preacher-turned-dentist and a mother who was a descendent of a famous pioneer, Colonel Ebenezer Zane, a Quaker who had come to America in 1683 with William Penn. Young Pearl, fascinated by baseball and fishing and “dime novels” about the west, did not seem to be destined to become the most popular American author in the first half of the twentieth century.

As a master of the curve ball, Pearl Gray did, though, seem destined to excel in sports. Although it was his brother, Romer, who became a major-league star, Pearl received a baseball scholarship to attend the University of Pennsylvania.

In high school, his strength—although at maturity he stood only 5’9” and never weighed more than 150 pounds—stood him well in local fights and also, on Saturday mornings, in assisting his dentist father. Pearl’s job, because of his unusual strength, was to extract teeth, for which he received seventy-five cents a week. When a state licensing official objected to Pearl traveling to other small towns to extract teeth on weekends, his father decided young Pearl should become a dentist.

After graduating from the University of Pennsylvania in 1896, Pearl Gray moved to New York and set up a dental practice under the name P. Zane Grey, D.D.S. Indifferent to dentistry and encouraged by his wife, he began writing novels.

His wife, Lina Elise Roth, who became his beloved “Dolly,” paid the cost of printing of his first novel, Betty Zane, a story about his famous pioneer ancestor who, when the fort at Wheeling, West Virginia was under attack by the British in the Revolution, saved the day by running to the fort with powder in her apron…a story once popular in elementary school readers.

That book, though, was not successful. Nor the next. Or the next. Or the next.  Frustrated, living on the dwindling inheritance of his wife, and now thirty-five years old, Grey met, on a New York lecture tour, an old hunter, Buffalo Jones, and Grey traveled west with him for several weeks. This trip marked the turning point. Thrilled by his Western experience, Grey returned to write The Last of the Plainsmen, only to be told by a Harper’s editor that he had no writing ability whatsoever…the same firm that published his next Western novel and that thereafter published virtually everything he wrote.

The turning year in terms of publishing was 1910 when Harper’s published Heritage of the Desert. The first big year was 1912—with the publication of Riders of the Purple Sage, which some say is the best Western novel ever written, and still one of the most popular. That novel established Grey financially and as a writer.

Now that Grey was able to support his wildest ideas he became dedicated to a sport he had always loved—fishing. Although while growing up in Zanesville, his mother had told him “a fisherman is a lazy boy grown up,” Zane Grey became America’s best known fisherman, holding many world records—bluefin tuna, yellowtail, striped marlin, dolphin, silver marlin, tiger shark, Allison’s tuna, Pacific sailfish, broadbill sailfish. And, Zane Grey was the first man to catch a fish weighing more than 1,000 pounds using only rod and reel.

While he was enjoying his international reputation as a fisherman, Zane Grey’s novels were establishing a worldwide reputation for him that would outlive his skill with rod and reel. His novels were translated into numerous languages. He was and still is popular in the Scandinavian countries, in France, Germany, Holland, Spain, Russia, South America, and even in Hebrew translation in Israel.

Incredibly prolific, Grey produced 56 Western novels, 3  novels set along the Ohio River, many short stories and articles, two baseball books (The Red-Headed Outfield and Other Stories and The Short Stop) and eight books on his passion—fishing.

Most of his novels, at least until the Depression, were serialized in the most popular magazines of the day, earning him $60,000 per novel in addition to the book sales.

Movie rights brought him additional income, usually bringing in $25,000 per book, a record figure for those days. Over one-hundred movies (including remakes) were based on his books and many famous actors got their start in his pictures: Gary Cooper, Randolph Scott, Wallace Berry, William Powell, Buster Crabbe, and even Shirley Temple.

After his death in 1937, the phenomenon continued. The Zane Grey Library, founded in 1950, many years after his death, has sold well over 10,000,000 of his books. The Zane Grey Theatre, beginning in 1956, ran on television for five years and 143 episodes. Dell for many years published a magazine, Zane Grey Western Stories. And some Zane Grey titles are still being republished.

Shy, warm, dedicated to simple virtues and to a natural world that he felt was spiritual, Zane Grey came closer, perhaps, than any other American, to producing a folk epic, a saga of American soil and American values.