A Leaky Ship Sinks An Empire 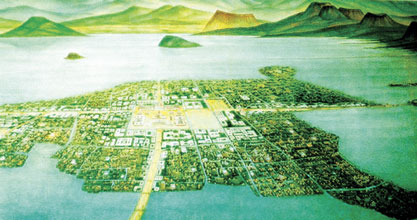 The next time you look seaward from your Cancun resort, scan the Caribbean horizon and imagine a small flotilla of 16th century Spanish ships heading south to north (that’s right to left for the directionally challenged). Suddenly the ships stop, reverse course and disappear to the south.  At the helm of these ships is none other than Hernán Cortés. It is March of 1519 and the great Conquistador faces an unexpected deviation that will recast the history of the Americas.

Departing from Cuba on February 18, 1519 with 500 men, 16 horses, lust for gold, and a burning zeal to save heathen souls, the Cortés expedition is scattered by a storm at sea but eventually arrives at Cozumel. After scaring the daylights out of the Maya inhabitants, Cortés attempts a form of crude communication, but without an interpreter the exchange is meaningless. Learning little, the Spaniards leave Cozumel and sail north past what is today Cancun, only to be stopped just off Isla Mujeres by a leaking ship in need of repair.  The epic journey that would forever change the world then does an about face and returns to Cozumel, laying anchor along the very beaches later used for Corona beer commercials (really!).

Ship repaired, the Spaniards were about to depart Cozumel for a second time. On the horizon a lone canoe appeared, crossing from the mainland from what is today Playacar. Cortés sends a small band up the beach with swords drawn.  As they approach, a man rises from the canoe and asks “¿Caballeros, son mis hermanos Cristianos?” (“Gentlemen, are you my Christian brothers?”). Aboard the canoe is a man who would become perhaps the most valued member in Cortés’ epic journey and linchpin in the devastation of the America’s most powerful civilization.

His name was Geronimo de Aguilar, a Spanish priest and shipwreck survivor. He had endured eight years as a Mayan slave after his 1511 trip from Panama to Santo Domingo was blown off course and the ship scuttled off the coast of Jamaica. A desperate band of surviving Spaniards regrouped and departed the Jamaican coast, only to be again marooned along Mexico’s Caribbean shore.

The battered foreigners were quickly captured by Mayan tribes, some of them immediately stripped, roasted alive and eaten. Others (including a companion Gonzalo Guerrero) were caged for fattening, but manage to escape and spend the next eight years in and out of capture. Enduring excruciating hardship, they survive and learn to speak Mayan. Gonzalo Guerrero marries, has children, launches the Mestizo race, and goes native. Aguilar however was anxious to return to his Spanish brethren. Hearing of the strange flotilla’s arrival on nearby Cozumel, he darts across the channel, surprising Cortés during his fortuitous return to Cozumel for ship repairs.

During the next two years Aguilar will never leave Cortés’ side. Weeks later, along the Gulf Coast of what is today Tabasco State, a slave woman is given to Cortés. History knows her as La Malinche, fluent in both Mayan and Nahuatl (the language of Central Mexico, the Aztecs and their vassal tribes). With the Mayan-Spanish fluent Aguilar and the Mayan-Nahuatl La Malinche at his side, the ever-cunning Cortés has the linguistic effervescence to understand, prod and manipulate mainland Mexico’s political realities.

Had the flotilla not returned to Cozumel for repairs, Cortés would have been deprived of his greatest tactical advantage: communication.  Had Cortés failed in his manipulation of Mesoamerican political rivalries, we can only wonder if Mexico’s indigenous people might have avoided, or at least delayed European domination, disease, and devastation.

Given the Aztec’s near absolute power and prosperity, might Mexico have become the Americas’ dominant civilization? But for a leaky ship and a bizarre twist of fate, the Americas instead became vassals of a backward European power whose influence forever colors the Mexico and Latin America we visit today.