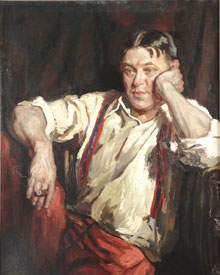 “We must respect the other fellow’s religion, but only in the sense and to the extent that we respect his theory that his wife is beautiful and his children smart.”

H.L. makes me laugh out loud.  Not a chuckle, mind you, but a full-throated shout of recognition as though he were my contemporary, not my grandfather’s. Not that all his caustic remarks and sly observations of events circa 1910-1940 would be relevant today, but enough of them are germane to make me guffaw. If only he were living and writing at this hour…

I was just a lad when father suggested I lay down Sherlock and take up Mencken. Dad referenced Walter Lippman, then Dean of American Journalism, who called Mencken ‘’the most powerful personal influence on this whole generation of educated people.’’ Ernest Hemingway agreed.

And so I became acquainted with Henry Louis Mencken of Baltimore, Maryland (1880-1956). A protégé of the great political commentator Ambrose Bierce (1842-1914), Mencken learned well. Sample one for a flavor of the other.

“The vote is an instrument and symbol of a freeman’s power to make a fool of himself and a wreck of his country.” Ambrose Bierce

“On some great and glorious day the plain folks of the land will reach their heart’s desire at last, and the White House will be adorned by a downright moron.”  H. L. Mencken

Mencken was the most influential, prolific and acerbic journalist in America in the 1920s and ‘30s, scalding all the shams, scams and hypocrisies of his times. He attacked chiropractors and the Ku Klux Klan, fellow journalists, and politicians (including FDR when he refused to let Jewish refugees fleeing Nazi persecution enter the United States). Most of all, he attacked Puritan morality. He called Puritanism, “the haunting fear that someone, somewhere, may be happy.” One biographer characterizes Mencken as a “detractor of middle-class conventions and certainties.” The middle-class he called the “booboisie.”

Yes, irreverence and sarcasm marked much of his writing but it was also firm writing, confident, inventive, blunt and hilarious.  Whether he wrote about police stations, courts, city hall, saloons, whorehouses, burlesque theaters or concert halls, intelligence graced every sentence. But he was not above writing with unabashed nostalgia in his later years. Here for example is a particularly poignant memory from his reporting days in Baltimore.

“I knew cops who were really first-rate policemen, and loved their trade as tenderly as so many artists or movie actors. They were badly paid, but they carried on their dismal work with unflagging diligence, and loved a long, hard chase almost as much as they loved a quick, brisk clubbing. An ordinary flatfoot in a quiet residential section had his hands full. In a single day he might have to put out a couple of kitchen fires, arrange for the removal of a dead mule, guard a poor epileptic having a fit on the sidewalk, settle a combat with table knives between husband and wife, shoot a cat for killing pigeons, rescue a dog or a baby from a sewer and flog half a dozen bad boys for throwing horse-apples at a blind man.” Clearly when he left the newsroom of journalism, he entered the temple of literature.

He also entered the halls of academe as a self-styled scholar who researched and published a history of The American Language (her vernacular speech), which he loved. It included a translation of the Declaration of Independence into American English that began: “When things get so balled up that the people of a country got to cut loose from some other country, and go it on their own hook, without asking no permission from nobody, excepting maybe God Almighty, then they ought to let everybody know why they done it, so that everybody can see they are not trying to put nothing over on nobody.”

I suppose it’s not too hard to understand that a superior mind would eventually meet Friedrich Nietzsche and form a mind meld—the Übermensch and all that rot. Such nonsense led Mencken (of German descent) to favor the Nazis for much of the war. He came to his senses after Hitler’s Final Solution became known.

You may have first heard of Mencken in connection with the Scopes Trial in Dayton, Tennessee in 1925.  He called it the Monkey Trial in the daily dispatches  he sent to his paper, The Baltimore Sun. After all, trained chimpanzees were performing on the courthouse grounds to mock the idea that men derived from apes. In hindsight he concluded that “…it is even harder for the average ape to believe that he has descended from man.”  Advocates of evolution lost that round (John Thomas Scopes was fined $100 for teaching evolution in the school) but didn’t lose the fight.  Even today some American creationists, fighting in courts and state legislatures to demand that creationism (cf. “intelligent design”) be taught on an equal footing with evolution in the schools, have conceded that it was Mencken’s trial reports in 1925 that turned public opinion against creationism.* Such reporting earned him a place on the editorial board of the Baltimore Sun as well as notoriety.

His honesty can be as shocking today as it was in the ancient days of the first quarter of the 20th century.  A few gems:

“Giving every man a vote has no more made men wise and free than Christianity has made them good.”

“The worst government is often the most moral. One composed of cynics is often very tolerant and humane. But when fanatics are on top there is no limit to oppression.”

“The whole aim of practical politics is to keep the populace alarmed (and hence clamorous to be led to safety) by menacing it with an endless series of hobgoblins, most of them imaginary.”

Mencken’s famous definition of democracy as “the theory that the common people know what they want and deserve to get it good and hard.”

“There is always a well-known solution to every human problem---neat, plausible, and wrong.”

“We are here and it is now: further than that, all human knowledge is moonshine.”

“The chief contribution of Protestantism to human thought is its massive proof that God is a bore.”

“Love is the triumph of imagination over intelligence.”

“Marriage is a wonderful institution, but who would want to live in an institution?”

“The instant I reach Heaven, I’m going to speak to God very sharply.” (He {Mencken, not God} delighted in “liberating” Gideons from hotel rooms and mailing them to irreligious friends with a note ‘’compliments of the author.’’)

His epitaph reads: “If, after I depart this vale, you ever remember me and have thought to please my ghost, forgive some sinner and wink your eye at some homely girl.”

*The 1955 play and the 1960 movie, Inherit the Wind, tell much of the story of the dramatic trial. The film stars Spencer Tracy as Clarence Darrow, Frederic March as William Jennings Bryan (opposing lawyers) and Gene Kelly as H.L. Mencken, an odd choice for many.