Milan to Verona by Autostrada 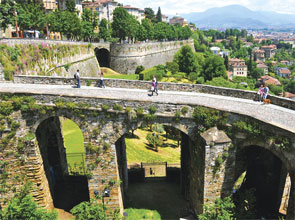 My one earlier visit to Italy was on a cruise that left only cravings for more of what was still unseen in the heartland of Northern Italy.

The plan for this trip is to drive the countryside within a triangle loosely anchored by Milan, Venice, and Florence, that includes Verona, Padua, Venice, and Parma.

Milan has been left for the end of the itinerary, which turns out to be fortuitous.

Verona, the first night’s destination, should be a leisurely drive of under three hours, but that plan is derailed the moment the plane touches down.

A light rain soaking the runway becomes a deluge in the time it takes to clear Immigration and Customs and point the rental car east on the autostrada.

Rain and fog have throttled visibility down to a few car lengths, but heavy traffic includes plenty of trucks.

In the no-speed-limit left lane, fast-approaching headlights loom in the rear view until they blow past, undeterred by the weather.

It takes nearly two hours to cover the first 60 miles.  By midday, though, there’s a break in the weather and the Italian Alps, ever-present on the right side of the autostrada, begin to appear out of the fog and clouds.

With a room guaranteed for the evening in Verona, an unscheduled stop for lunch has become suddenly appealing, and an exit labeled “Bergamo” is well-placed.

It turns out that there are actually two Bergamos.  The old city, the Citta’ Alta, sits high on a bluff at the edge of the Alps, and the new city is spread out on the plain below.

Even by European standards, this place is old, for the Celts were here before the Romans.

The daunting climb to the Citta’ Alta was not deterrent enough for Attila the Hun, who destroyed it the 5th century.

The city, though, rebounded to become the seat of a Lombard duchy, and after its conquest by Charlemagne, a county seat.

In the early Middle Ages it was an independent commune, but later became part of the Venetian Republic until both were conquered by Napoleon.

After Napoleon’s exile, it became part of the Austrian Empire until it was incorporated into the Kingdom of Italy in 1859 .

This city has lent its name to a regional folk dance style known as bergamask. Shakespeare refers to it in A Midsummer’s Night’s Dream as a “Bergomask dance”.

The music is characterized by dissonances and irregular intervals that later inspired Debussy’s “Suite Bergamasque”.

The Città Alta is surrounded by 17th-century defensive walls.

It is connected to the lower city by a cable car.  With parking spaces very limited in the upper city, the funicular is the recommended approach.

Lunch at a trattoria in the Citta’ Alta ends with cleared skies.

A hotel room awaits in Verona, but with weather delays and the stop in Bergamo, it’s dusk by arrival.

Verona’s strategic location between Milan and Venice, astride the route through the Alps to Innsbruck, has made it much contested for centuries.

Incredibly, though, it is one of a handful of Italian cities that did not suffer major destruction during World War II.

The city’s history is foggy before it became a Roman  town around 300 BC, but the value and importance of its many historical buildings have made it a UNESCO World Heritage Site.

At the time of its completion in 1356, Verona’s Ponte Scaligero boasted the world’s largest bridge arch.

A Roman amphitheater, The Arena, still survives in the Piazza Bra, and only the theaters in Rome and Capua seat more than it 25,000.

While little of the original perimeter wall remains, the interior is virtually intact, and it is still used today for theatre and summer opera, fairs, and other public events.

As in Bergamo, there are enough sights to keep visitors occupied for a couple of days, but Venice calls, and with the weather now clear, tomorrow’s arrival should be well before lunch. 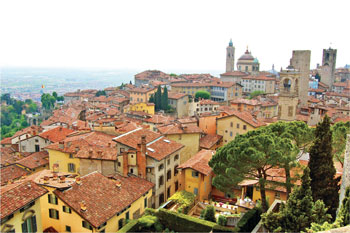 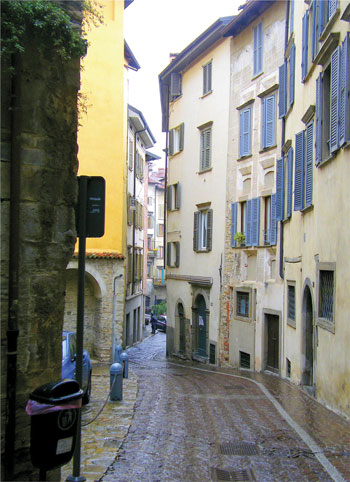 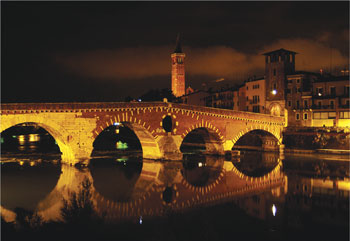 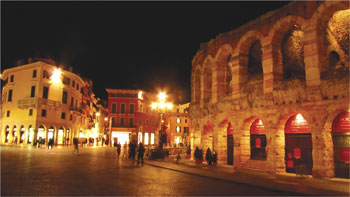 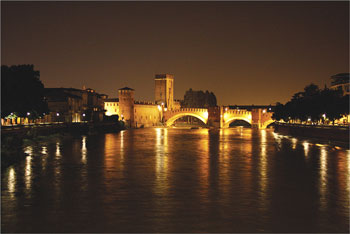