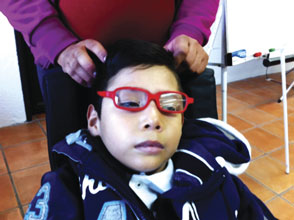 Santi was born in 2011, he lives in St Rosa de Lima with Mom and Dad. He had a normal birth and was a normal child until he was thirteen months old. Then he stopped walking, had convulsions, could not eat and did not talk or make noises anymore. The parents took him to Hospital Civil and after many tests he was diagnosed with OMS or Opsoclonus-Myoclonus Syndrome.

The symptoms are random and rapid eye movements in both horizontal and vertical directions, unsteady, brief, repeated, shock-like spasms of several muscles within the arms, legs, inability to speak and more.

In his case, the disorder has been designated “idiopathic” attributed to a viral infection.

He was also diagnosed with Encephalopathy which is also a viral infection of the brain. He cannot walk, talk, eat and he is limited to a wheelchair. He is undergoing speech, physical and swim therapies at Teleton on a weekly basis and is followed by his doctors at the Zooquipan Hospital in Zapopan.

He still has many seizures which stop him from getting better, he is on medication for the seizures and his doctors are hoping that he will stop having them long enough for him to regain cognitive functions.

We are paying for his medication, equinotherapy, special tests and transport to and from Guadalajara and for fittings and repairs to his wheelchair which was donated by Teleton. Since 2012 we have reimbursed the family a total of 168,000.00 pesos.

As Clinic Director for Ninos Incapacitados, I thank you once again for this opportunity to present one of our kids. I invite you to join our monthly meetings at the Real de Chapala in Ajijic on the second Thursday of the month at 10:00 am to meet our “Child of the month” and learn more about our organization.